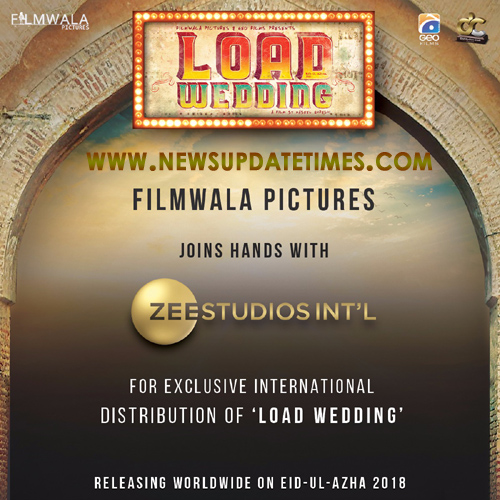 Lahore (Muhammad Yasir) Filmwala Pictures is proud to announce the first ever collaboration with one of the most reputable and biggest media houses in Asia: Zee Studios International for the global release of their film – Load Wedding – all set to release this Eid ul Azha.

The film stars one of the most loved couple of the Pakistani film industry – Fahad Mustafa and Mehwish Hayat in the lead roles and is directed by Nabeel Qureshi.

Speaking about this momentous partnership Fizza Ali Meerza, CEO Filmwala Pictures said, “This is a great moment for Pakistani Cinema & Filmwala Pictures – and it just feels phenomenal to be able to take Load Wedding to so many new markets with this amazing collaboration. Zee Studios International has an immense reach across the globe, we are just honoured that they felt Load Wedding was the right Pakistani film for them to come on board with their support and help us reach new territories, markets and audiences – helping us make Pakistani Cinema global.”

Teaming up with Zee Studios International, Load Wedding is going to be released in USA, Canada, UK, GCC, Singapore, South Africa, Australia, New Zealand/ Fiji and Mauritius in addition to Pakistan where it is being distributed by IMGC.

Nabeel Qureshi, Director Load Wedding stated, “Load Wedding is already creating immense excitement within the audiences in Pakistan and going global with Zee Studios International could be the best thing possible for this project. Filmwala Pictures is on the verge of creating history and we need love and support from our well-wishers.”

Zee Entertainment launched in 1992 by Dr Subhash Chandra, has made a mark for itself not only in South Asia but worldwide. They embarked on their dominance in cinema with the release of Gadar – Ek Prem Katha in 2001 and since then have released some of the biggest hits such as Rustom, Jazbaa, Qarib Qarib Single, Hindi Medium and Secret Superstar to name a few.

Load Wedding will be hitting the cinemas in Pakistan and worldwide on Eid ul Azha.

Pooja Bhatt opens up on India’s ban on Pakistani artists