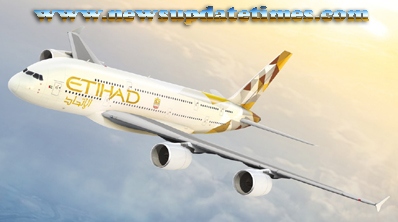 Lahore – Hundreds of visitors from around the world, attending official public opening celebrations of the Louvre Abu Dhabi, were treated to a low-level fly-by of the Jean Nouvel designed museum by one of Etihad Airways’ flagship Airbus A380 aircraft. The aircraft chosen for the display now also features Louvre Abu Dhabi’s official logo on each of its four engines, to promote the opening of the institution.

Etihad Airways also took the opportunity to capture a series of spectacular images from the fly-by, and commissioned a short video directed by up-and-coming Emirati director, Ahmed Abdulqader, shot from the flight deck of the aircraft and from within Louvre Abu Dhabi, to celebrate the historic occasion. Two specially equipped helicopters were also positioned above the capital to capture air-to-air filming of the aircraft as it flew over the museum, located in the UAE capital’s Saadiyat Cultural District.

Peter Baumgartner, Etihad Airways Chief Executive Officer, said: “Echoing the sentiments from the signing of our landmark partnership agreement with Louvre Abu Dhabi last month, Etihad Airways is honoured to play its part in the inauguration of this hugely important universal institution.

“Abu Dhabi can now proudly take its place among the world’s foremost cultural destinations, and we, as the UAE’s national airline, are poised to play our part in bringing millions of guests to our home to experience this modern wonder of art and humanity first-hand.”

Online platforms such as Facebook have helped women entrepreneurs expand their...