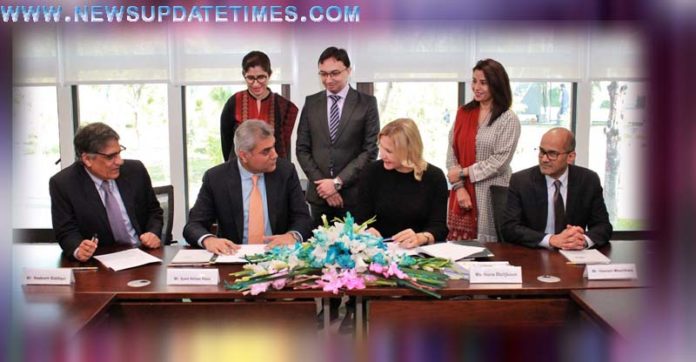 This financing was a part of the initial Rs 10.3bn expansion plan announced earlier, out of which Rs 5.4bn has already been raised from the issue of right shares.

Engro Polymer has been associated with International Finance Corporation (IFC), a member of the World Bank Group, since its inception. EPCL, which remains the industry leader being the sole producer of PVC resin in Pakistan, disclosed adding a new production line of PVC after demand for the chemical continued to surge significantly in the country mainly due to a boom in construction activities.

While speaking at the occasion, Syed Abbas Raza – CFO Engro Polymer and Chemicals Limited said: “This financing of US$ 35 million would not only fund our expansion plan but would also bring precious foreign exchange to our country. The funds from International Finance Corporation will contribute towards the completion of the expansion project paving the pathway for development of construction activities in Pakistan.”

EPCL announced investing over Rs10 billion for expansion of the plants including those producing other related chemicals like VCM (raw material for PVC) and adding a new product to its portfolio namely caustic soda flakes. While expanding the business, EPCL will add a new PVC plant with a capacity of 100,000 tons (taking total capacity to 295,000 ton per annum) and increase production of VCM (the raw material) by 50,000 tons through debottlenecking of the existing plant by the third quarter of 2020.

Engro Polymer aims toward converting all its long term debts on principles of Islamic finance mode. Bilal Ahmed, Head of Treasury at Engro Polymer added that: “The Company is also in a process of issuance Sukuks to refinance the existing debt on the Company’s balance sheet. We aim to complete the exercise before the end of 2018.”

Nena Stoiljkovic, IFC Vice President, Asia and Pacific, said: “Engro Polymer’s success highlights the potential of the private sector to build capacity and transform industries through the adoption of better technology and standards. This investment will send a strong market signal on the positive outlook for the chemical sector, while also showcasing Pakistan’s promise to mitigate climate change.” 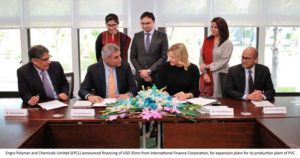 Nadeem Siddiqui, Senior Country Manager IFC, adding at this occasion: “IFC is proud to enter into the first Islamic finance transaction with a manufacturing company in Pakistan. This country offers a huge potential for industrial growth and development. Hopefully this will be the first of many such transactions that IFC will conduct.

Carmakers say 2020 production down in ´worst crisis ever´