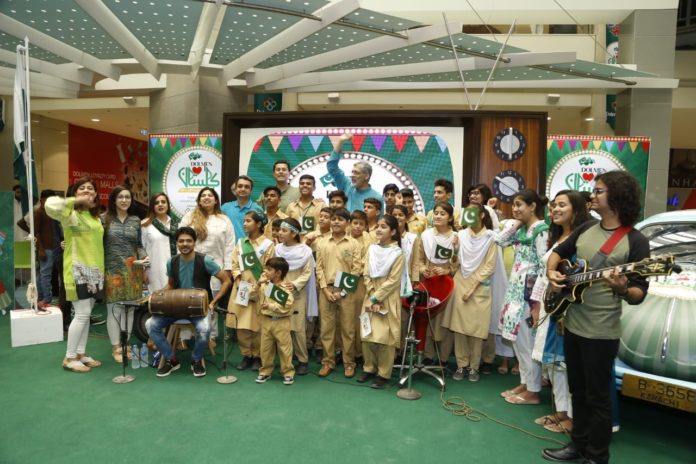 Karachi (Muhammad Yasir)  Dolmen Mall also known as a Mall with a Heart, celebrated Independence Day through five days of nostalgic retro experience. From 10-14 August, all three malls in Clifton, Tariq Road and Hyderi were adorned with pop up installations, green and white embellishments, lights and aesthetic visuals to mark the 71st birthday of the land of pure.

Creative décor featuring vintage memorabilia, old radios, TV, gramophone and photo booths were put up throughout the mall to keep the visitors engrossed. The visitors were most excited by the dated adornments in the form of old Pakistani currency, phone booths and classic Pakistani vehicles.

The majestic festivities began with a formation and pledge towards Pakistani progress by less privileged, highly talented students of TCF (The Citizens Foundation) at Dolmen Mall Clifton who were present through the festivities. As a collaborative effort, World Wildlife Federation (WWF) also launched a grand recycling drive “Beat Plastic Pollution” and a Plantation drive “Rang Do” at the mall.

The eve of Independence Day was marked with Performances by Asif Sinan, South Asian Ensemble co-curated by Salt Arts and Ahsan Bari. Kashmir Band performed live and joined the audience in a zealous countdown to the nation’s 71st Independence Day.

Recognising the perseverance and lifetime accomplishment of renowned Pakistanis, the mall presented John Permal, Nighat Misbah, Ansar Burney and Javed Miadad lifetime achievement awards for their contribution towards Pakistan and invited them and their families to hoist the national flag at the mall. Visitors were taken to a whole new level of patriotism through parades, flag hoisting and cake cutting ceremonies on the Independence Day.

The biggest attraction remained the #BoulevardChowk that led the visitors into a nostalgic engagement experience with games such as hopscotch, ludo, carrom and pittu garam. Dolmen Mall invited visitors to digitally share photos, tributes, achievements, fables from the time of independence.

On this occasion, Anum Nadeem, Director Dolmen Group said, “Dolmen Mall has always brought appeal for its valued customers, be it any occasion or festival. We take pride in our pledge to bring people closer and to make a difference in people´s perceptions about our country.”

Rafia.pk- A New Face of Fashion in the Market