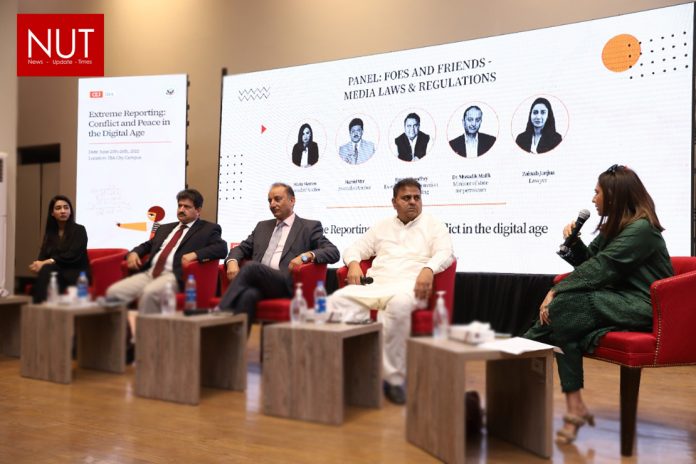 Karachi (Muhammad Yasir) The two-day conference on ‘Extreme Reporting: Conflict and Peace in the Digital Age’ held at the Centre of Excellence in Journalism at the Institute of Business Administration washeld on Saturday with a keynote speech by veteran journalist Hamid Mir.

Mr Mir discussed how his career started and why it is important to groom young Pakistani journalists and teach them about journalism.

According to Ms Shamsi, without political satire, without freedom of speech, without quality journalism, the world is a slightly nastier place. “Peace isn’t just the absence of conflict, it’s conditions where justice, equity, and harmony can flourish. Journalists don’t broker peace that’s the job of the politicians and frankly, they’re not doing a great job of settling disputes themselves – journalists help those seeking justice, and highlight inequity,” she said.

“Meanwhile, social media has turbo-charged the politics of conflict and populism. We live in a world where heroes are easy to manufacture and villains even easier to vilify. It takes a few tik tokkers and YouTubers. Like and subscribe to my channel, follow me.

“Besides, why promote harmony when polarization gets the access to the powerful, the fame, the clicks and ratings? I hope that’s one of the many questions we can find an answer to over the next couple of days, and one of those questions is fundamental – why do we still need journalism when we can’t even assume that people learn about the world through good journalism,” she added.

Dr Zaidi said that he was delighted to be part of the conference which brings together Pakistan’s best and bravest journalists talking peace and about the challenges they face in an age of growing conflict, from those related to control and regulations, to outright intimidation and threats.

Talking about conflict as a social scientist, Dr Zaidi said that in the social sciences, there is conflict in everything including the family – the hierarchy creates conflict and conflict can also have many forms.

Welcoming the participants to the two-day conference, Dr Zaidi said: “I hope there’s a lot of conflict in your discussion and some resolution too.”

The panel discussed the grim reality of the state of journalism in Pakistan and how important it is for the country now and in the future.

Mr Haider said that it wasn’t a question about creditability but trust. “A user is now basing news preference on if they like/dislike the person sharing the news (which is essentially their opinion). Verification of news or fact is secondary for them,” he said.

For Geo’s Benazir Shah while journalism is important and needed – the quality of what you read in the newspapers had gone down.

“The problem with consuming news on social media is that there will always be doubt — is this accurate and authentic? I get a lot of messages from my friends who will send me a link and ask if this is fake. There is also a misconception between a journalist and reporter. A reporter provides information and a journalist will provide it in context. There are a lot of layers in a media organisations which get eliminated in social media,” she added.

According to Mr Alam, journalism does not exist in a vacuum. “Conflict is essential for what we do. The conflict Pakistan is facing right now is not being resolved in a democratic way and so journalism cannot survive in an undemocratic atmosphere. There is no real democracy in this country so journalism right now is distorted and mutilated. If people don’t trust the media, you can’t blame them. Even within that, image in we have done good journalism and are still doing it,” he said, adding that while the future of journalism might not be bright but was there.

“Back in 2018, I predicted that media boom will be over and in the next five years it will just be social media. There is no proper mechanism for the media – there is no regulation,” said Mr Chaudhry.

In his opinion, Pakistani media needs three things to survive: regulation, proper mechanism and keep up with technology changes.

State Petroleum Minister Musadik Malik had a very different take on the topic. For Dr Malik, the media and politicians are the same. “I don’t think there is a difference. You can call them organisation, politicians, journalists – essentially they are all the same thing. They are the country’s elite and they are shocked. Their responses are of shock or as they say frozen in shock, and they do not know how to respond,” he said.

“We need to realise that the times have changed. The medium of news consumed has changed, politics has changed. It is all bankrupt but the question is: who shook them? The people,” he added.

The panel went on to debate on regulations, implementation, self-regulation, fake news and freedom of the press.

The third session of the day, Hasna Mana Hai, the panel had everyone laughing with their witty one liners and stories.

Comedian Shehzad Ghias Shaikh asked content creator Tamkenat Mansoor, writer, poet and communications expert Shahzad Sharjeel, musician Ali Aftab Saeed and Urdu columnist Yasir Pirzada to talk political satire, social commentary, comedy’s role in social change and is it difficult to write satire in Pakistan and what to do when the ridiculous is normal, the normal is ridiculous.

The last session of the day was: The Culture Connection – Track II with journalist Buraq Shabbir moderating the session.

This conference is a part of the Peace Journalism program, held by the CEJ in collaboration with US Consulate Karachi, that began in May 2021 and will conclude this month. The program included online workshops on peace and conflict reporting, mobile journalism, data journalism, social media & photojournalism. The program also offered a mentorship with senior journalists.

Lack of political will & feudal mindset main reasons for lack...