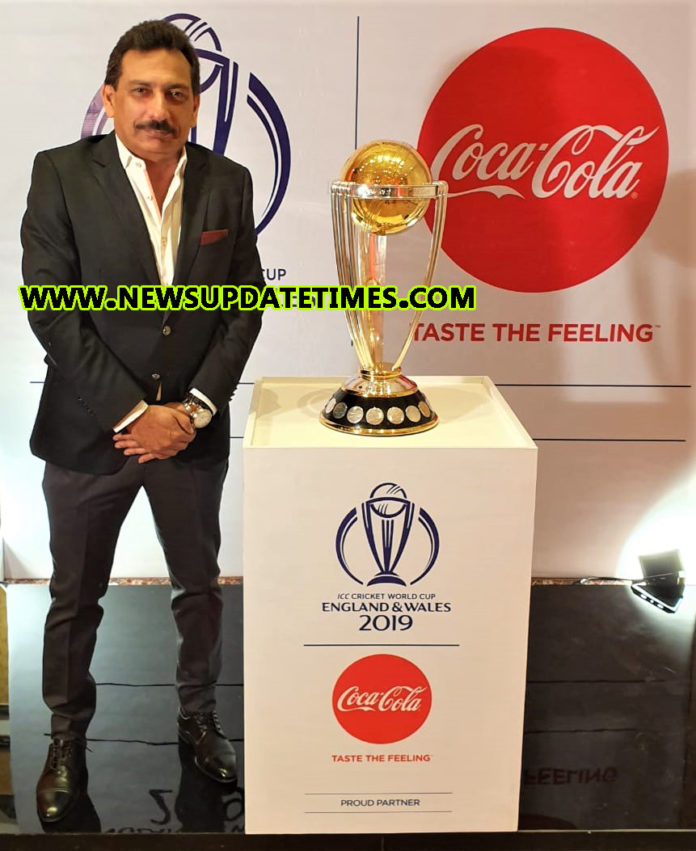 Lahore (Muhammad Yasir) Coca-Cola Pakistan once again lived up to its reputation of actively supporting the passions of the Pakistani people by bringing the ICC World Cup Trophy to Pakistan for nearly 3 days earlier this week, giving all the opportunity to view it personally and take photos with it. The Trophy arrived in Islamabad in the early hours of May 01 and was moved to Lahore later the next day. In both cities the Trophy was displayed for viewing by the media, members of the digital community and by the public. The Trophy had arrived in Pakistan once before earlier, but coming again now, just a few weeks before the start of the 2019 Cricket World Cup, it served to rejuvenate the passion of all Pakistanis for the country’s participation in the most anticipated and prestigious of all international competitions in the world of cricket.

The silver and gold Trophy is made up of three silver columns holding a golden globe. The columns represent batting, bowling and fielding and the globe symbolizes a cricket ball. Pakistan last won the World Cup in 1992 under the captainship of Imran Khan.

Coca-Cola is on board with ICC in a strategic partnership as the exclusive non-alcoholic beverage partner, for the next five years, catering to more than one billion cricket fans around the world. This collaboration will align the strengths of both organizations, with Coca-Cola’s diversified portfolio of hundreds of brands and global presence, and ICC’s resolution to expand cricket’s global footprint as a sport, synergizing to promote cricket worldwide like never before.

The trophy arrived at Islamabad on May 1, 2019 where it was displayed at the Serena Hotel and from thereon at Marriott hotel on May 2, 2019. From there onwards, the trophy toured its way to be exhibited at the Pearl Continental Hotel in Lahore on May 3, 2019. Cricket fans at the aforementioned venues swarmed in to avail the opportunity of a selfie spree and to freeze the festive moments for posterity.

Rizwan U. Khan, General Manager, The Coca-Cola Export Corporation Pakistan and Afghanistan stated at the occasion, “Coca-Cola has endlessly worked in elevating Pakistan’s positive image on the international front. The arrival of the ICC World Cup 2019 Trophy to Pakistan is evidence of this magnificent achievement, as the passion for cricket is amongst the strongest threads that binds this nation together. The ICC World Cup is an opportunity to once again express national solidarity beyond any intersectional identities and the entire nation stands behind our team in wishing it all the best for bringing the World Cup home. Coca-Cola and ICC recognize and value such passion and sentiments and aspire to creating lasting moments of sheer happiness and joy for all Pakistanis through this collaboration”.

The World Cup squad to be led by Sarfraz Ahmed was announced on April 18 with Pakistan set to make its first mark against West Indies on May 31 at Nottingham. The most anticipated encounter between Pakistan and India, as is the highlight of every World Cup, is slated for June 16. The ICC Men’s World Cup will run from May 30 to July 14, 2019 in England and Wales.