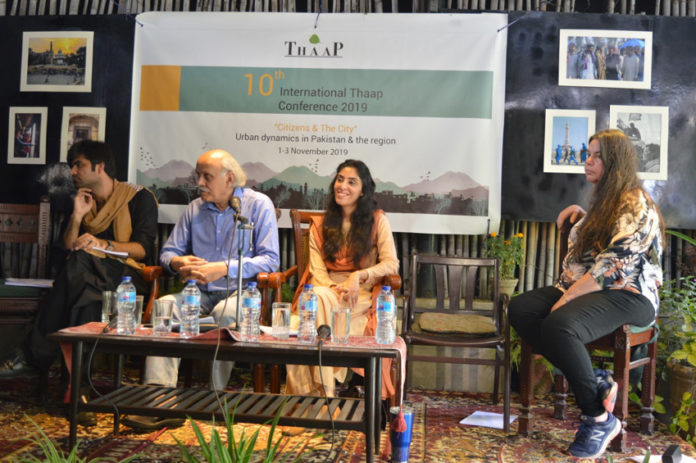 Lahore (Muhammad Yasir) Today was the last day of the fruitful conference held by THAAP in collaboration with Institute for Art and Culture. The paper reading sessions were held at 43-G, Gulberg-III and came to conclusion on the evening of 3rd of November. THAAP provided a formal platform where papers were discussed on the theme of “Citizen and the City” and an in-depth dialogue took place between writers, scholars and students. People from diverse fields and delegates from Australia, China, Germany, Switzerland, India and Pakistan took part in the conference. This multicultural environment supplemented towards having a more productive and constructive discussion. 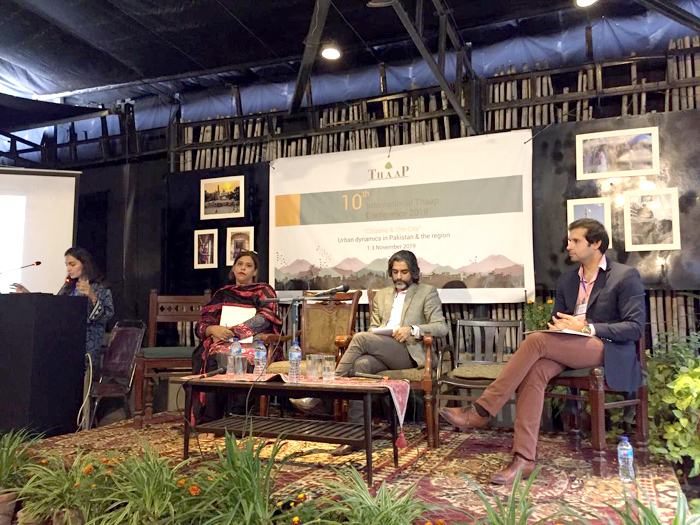 The conference of 2019 was divided into eight sessions. The first six sessions took place on the 1st and 2nd November, commencing with the seventh session on the 3rd of November. The seventh session was chaired by Prof. Mushtaq Soofi, School of Culture and Language, Institute for Art and Culture, Lahore. Dr. Kashif Khan presented the paper titled “Military Offensive and Forced Migration: Analyzing the Plight of the North Waziristan IDPs”. He opined that the war and operation Zarb e Azam in North Waziristan agency has destroyed the social and economic life of the tribal people.  As IDP’s have faced financial crises and are not able to build their destructed structures again, hence the government should reconstruct their schools, markets and hospitals on emergency basis. Government Officials and Donor agencies should utilize the available recourses for aid purposes where the aid is directed for the development, education and rehabilitation of the area. Ghiasuddin Pir and Sahar Saqlain’s paper titled “Confinement and Refinement: The Origins and Evolution of Confinement Spaces for the Treatment of Mentally Challenged Citizens in Lahore, Punjab” went through an evolutionary account of prevalent mental health disorders and associated treatments, the paper provided an overview of evolving rights and responsibilities of mentally challenged citizens through a study of the social and built environment, laws dictating the rights of the insane, historical case studies and firsthand accounts of the current members of Punjab Institute of Mental Health. Prof. Jakelin Troy’s paper titled “Nalawangun we remain: Aboriginal Citizens Shaping the Urban Dynamics of Sydney, Australia” presented a case for the important continuing presence of the Aboriginal traditional owners of Sydney, helping to maintain and renew their language and cultural life. 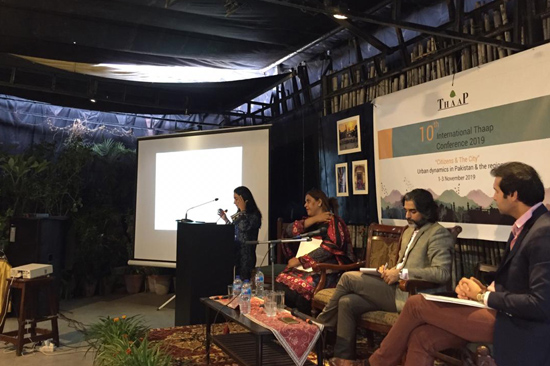 The eighth session was chaired by Prof. Syed Faisal Sajjad, Head of Department, Architecture, National College of Arts, Lahore. Papers were presented by Asad Ahmed titled “Urban Transphobia in Cityscapes: Interrogating Lahore as a Safe Space for Transgenders”. His research aimed to sensitize and raise awareness about Urban Transphobia and highlight the problems faced by these individuals. Since these individuals challenge the deep rooted binary gender forms of the society, they often become the epicenter of discrimination, repression and intolerance. Amrita Alam and Intikhab Alam’s paper titled “Delhi – A Home Away from Home”, was presented in a video format focusing on the refugees from Afghanistan who despite the large number of hardships found a new home in India, providing them with basic safety and a chance for a better tomorrow irrespective of how their lives are affected by lack of recognition. Prof. Dr. Samra Mohsin Khan’s paper titled “The Dual City: Political, Cultural and Spatial Segregation of Peshawar during the Colonial Era” was presented by Ar. Sofia Wanchoo Mir. The paper focused on colonial cities and how they came to simultaneously sustain two or more distinct cultures; their segregations and relations, differentiations and amalgamations, domination and re­sistance. Dr. Humera Naz in her paper titled “Urbanism, Urbanization and Acculturation in Medieval South Asia: A Case Study of Delhi City” said that uUrbanization is not merely an increase in the proportion of urban population, but is a continu­ing process which encompasses all factors underlying the process of economic growth and socio cultural change. The emergence, spatial spread, growth and decline of cities and towns are very much related to the processes of urbanization and these processes are triggered due to different con­tributing factors on different instants of time. Neha Fatima in her paper titled “The Role of an Urban Space and Citizen” said that Lahore, once a city of gardens, was always planned and lived in a way that it provided a neighborhood living, the organic growth and winding narrow streets with squares every now and then of the walled city is a true example of this.   The session concluded with film screenings and discussion.

The Chief Guest for the closing session of 10th International THAAP Conference 2019: “Citizen and the City” was Prof. Dr. Fazal Ahmed Khalid, Chairman Punjab Higher Education Commission (PHEC). The Guest of Honor was Ms. Shaista Pervaiz Malik, Education Expert, and Chairperson SAARC Chambers Women Entrepreneurs Council. The session started off with Ar. Aabidah Shujaat Ali giving a report on the proceedings of the conference which was followed by Prof. Pervaiz Vandal’s discussion on the future plans of THAAP. The Guest of Honor, Ms. Shaista Pervaiz addressed the conference with paying tribute to efforts of the Vandals for their efforts in promoting awareness on social and humanistic sciences in the region. Being an educationist, she threw light on delicate issues of depreciating socio-cultural factors and talked about the importance of mainstreaming the cause of efficient ways to find a balance between contemporary urban demand and the needs of citizens in the region. The Chief Guest, Prof. Dr. Fazal Ahmed urged the researchers to relate their research with social and economic problems of the country and come up with tangible solutions whether they belong to sciences or arts, humanities or architecture. The conference was beautifully summed up by Prof. Sajida H. Vandal’s closing address where she also thanked the organizers and the participants of the conference which was followed by distribution of certificates. The conference of 2019 concluded with a cultural evening showcasing performances by IAC Choir Society and IAC Theatre Society.