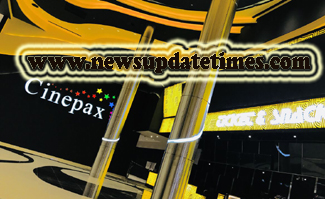 Cinemas have played a vital role in the revival of movies in Pakistan as they are the medium through which the movies reach the audiences, and Cinepax being one of the top cinemas in Pakistan is the main contributor with 37% share in gross boxoffice of PKR 4.23billion business of cinema in Pakistan.

Cinepax firmly believe in giving the best experience to their customers, and this time they have outdone themselves by introducing the ‘Largest’ cinema in Pakistan yet. A multiplex with 10 screens where CMAX technology is being introduced for the first time in Pakistan at Packages Mall, Lahore. The Largest screen is 4 stories high and 80 feet wide.

This will be Pakistan’s first screen with dual projection system & Dolby Atmos sound, that has both Golden and Silver class seating facility. There are total 10 screen in the multiplex with a total capacity of 1600 people. Out of the 10 screens, 2 screens have a 7.1 Dolby Sound system. Three cinemas will become operational from 22nd December and the rest will follow soon after.

The multiplex at Packages Mall is just the initial step towards their huge expansion plans. They have bigger and better plans for Cinepax and in a span of few years, they will expand into more cities and areas to ensure that quality entertainment reaches to everybody. Cinema in Pakistan is still in its early stages of revival as Pakistani film-makers continue to practice and improve their craft. They are in need for support from the cinema industry, and Cinepax is dedicated towards establishing international quality cinemas in Pakistan. The more the cinemas the higher the revenues for the film-makers which means more movie productions in a year, and greater business for the cinema industry as a whole

Saima Baloch will be seen in the role of Rajoo in...