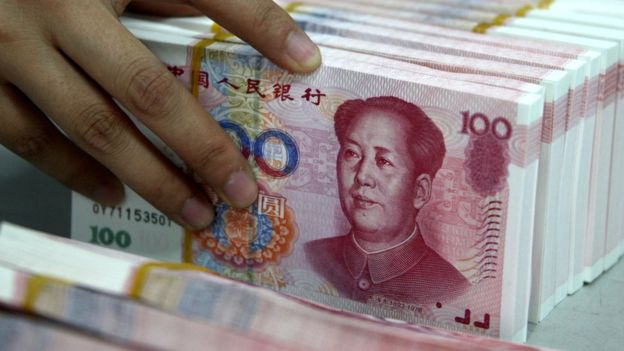 Ken Rogoff said a calamitous “hard landing” for one of the main engines of global growth could not be ruled out.

“China is going through a big political revolution,” he said.

“And I think the economy is slowing down much more than the official figures show,”

Mr Rogoff added: “If you want to look at a part of the world that has a debt problem look at China. They’ve seen credit fuelled growth and these things don’t go on forever.”
British exposure

Last week, the Bank of International Settlements, the global think tank for central banks, said that China’s credit to GDP “gap” – which analyses the amount of debt in an economy relative to annual growth – stood at 30.1%, increasing fears that China’s economic boom was based on an unstable credit bubble.

The figure was described as “very high by international standards” by the Financial Policy Committee of the Bank of England, which will now test British banks’ exposure to a Chinese slowdown.

British banks have $530bn worth of lending and business in China, including Hong Kong. That is about 16% of all foreign assets held by UK banks.
‘A worry’

“Everyone says China’s different, the state owns everything they can control it,” Mr Rogoff, now Professor of Economics at Harvard, said.

“Only to a point. It’s definitely a worry, a hard landing in China.
“We’re having a pretty sharp landing already and I worry about China becoming more of a problem.

“We’ve taken it for granted that whatever Europe’s doing, Japan’s doing – at least China’s moving along and there isn’t really a substitute for China.

“I think India may come along some day but it’s fallen so far behind in size it’s not going to compensate.”
‘Nervous’

Mr Rogoff said that European economies and the US had to ensure they were “on their feet” before any slowdown started to bite.

“The IMF has marked down its forecasts of global growth nine years in a row and certainly the rumour is they’re about to do it again,” he said.

Beyond China, Mr Rogoff said there was a good deal of uncertainty in the world over issues such as whether Donald Trump or Hillary Clinton will win the US presidential election.

He argued it was difficult to judge what Mr Trump would do if he won, and that a victorious Mrs Clinton might have her plans for infrastructure spending, for example, blocked by the Republican House of Representatives.

“I am certainly nervous, probably much more about a Trump victory, just because of not knowing what’s next,” Mr Rogoff said.

“I don’t like the [protectionist] trade policies of either candidate. I think free trade has benefitted the States immensely in its leadership position. So watching as an economist, this has been a painful election.”
Brexit impact

Mr Rogoff said it was unclear what the impact of Brexit would be on the UK economy as it was not yet possible to define the trade model that would be agreed or judge how well the European economy would be performing at the time Britain leaves the European Union.

Despite praising the Bank of England’s pro-active response to the referendum result, Mr Rogoff said that central banks were in an increasingly invidious position.
Monetary policy has its limits – it is not a panacea,” he said.

“In Europe, central banks are buying up a significant proportion of the corporate debt market – that’s what you do in China, in India, they’re doing that in Japan also.

“There are all sorts of other pressures and I worry in the long run that central banks are losing their independence.”