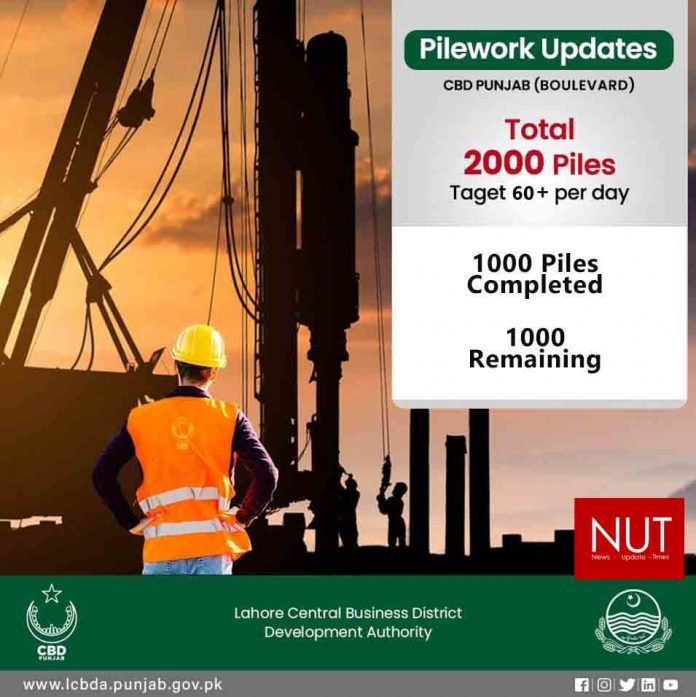 More than 1000 retaining piles out of 2000 rating piles have been completed on CBD Punjab Underpass and Kalma Chowk Underpass Remodeling Project. Lahore: Monday, December 12, 2022. Imran Amin CEO of Punjab Central Business District Development Authority (PCBDDA), also known as Central Business District (CBD Punjab), has directed the official contractor National Logistic Cell (NLC) of Kalma Chowk Remodeling project to work 24 hours on the project. The project developed at a cost of Rs 4.2 billion has completed 1000 retaining piles out of 2000 total retaining piles within a period of one month. According to the CBD Punjab spokesperson the authority is utilizing all the resources to the maximum to complete the project ahead of the schedule as per directed by the CEO, for the convenience of the public. The shifting process is in progress to move electrical and telecommunication instruments at Ali Zaib Road. A comprehensive traffic plan will be communicated to the public in collaboration with the City Traffic Police Lahore before the Kalma Chowk underpass is completely closed. We are fully aware that there is traffic pressure in the vicinity and alternate routes are given to overcome it. During his visit to the project site CTO Lahore, Dr. Asad Malhi said, that due to the construction work, there is an influx of traffic on Kalma Chowk and its adjacent roads, especially during peak hours, but there is no complete traffic jam reported. Alternative routes have been provided for daily commuters. CBD Punjab has initiated this project to solve the problem of traffic congestion permanently. We apologize to the public for the temporary inconvenience. CBD Punjab management and City Traffic Police, Lahore have requested the citizens to use alternative routes while traveling in Kalma Chowk and its adjoining areas so that they can avoid inconvenience. Imran Amin, the CEO, of CBD Punjab, has specially thanked and showed his profound gratitude for the continuous support of Chief Minister Punjab Chaudhry Pervez Elahi, Commissioner Lahore Mr. Amir Jan and all the stakeholders for their continuous support.