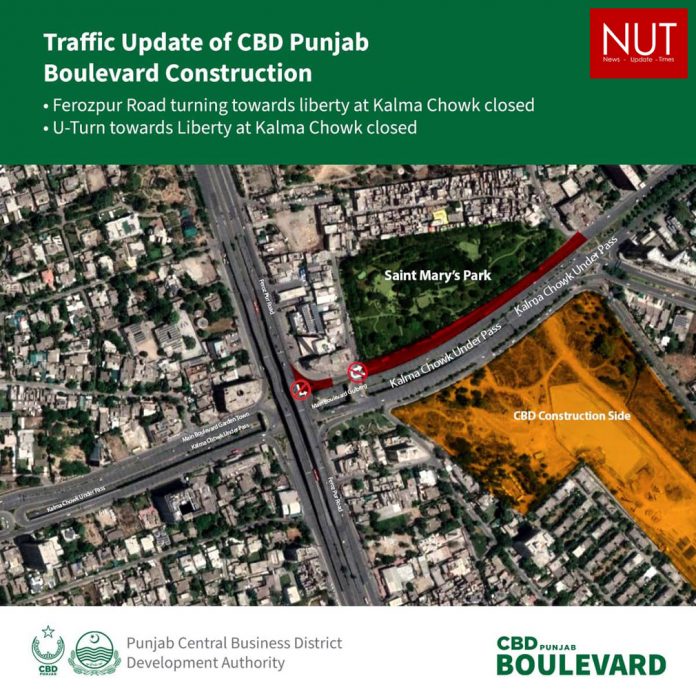 Lahore (Nut Desk) Punjab Central Business District Development Authority (PCBDDA), also known as Central Business District (CBD Punjab), started the construction of Kalma Chowk Remodeling and CBD Punjab Boulevard in the current month. The authority has ensured public relief and safety during the construction of this mega project. CBD Punjab is using multiple platforms to provide maximum information for daily commuters about road blockades to avoid any inconvenience. Minor traffic congestion is witnessed during peak hours but there are no complete jams reported which is evidence of the comprehensiveness of the authority’s traffic diversion and construction plan. CBD Punjab is in coordination with City Traffic Police (CTP) Lahore, to ensure flawless and uniform traffic flow. CTP is also airing hourly traffic updates on Rasta FM 89, an additional number of traffic wardens are also deployed at Kalma Chowk and adjoining routes, whereas the authority has also placed directional and diversion signboards for the assistance of the daily commuters. While talking about the latest development on the project and traffic updates Executive Director Technical PCBDDA Mr. Riaz Hussain said that “this is a massive scale project and we are working nights for its timely completion. Whenever there is construction work going on there are a few minor problems and we are giving our best to avoid any inconvenience for the residents of Lahore. I would like to request the people for their support as this project is for their benefit”. He further added that pile work from Saint Marry Park to Center Point is near completion and pile work on Ali Zeb Road is also started. ED Technical further said about traffic direction that road from Saint Marry to Center Point is completely closed to traffic. The influx of traffic coming from Ferozepur Road towards Liberty is directed to use Qaddafi Stadium or it is diverted from Kalma Chowk Underpass towards Liberty Market, traffic coming from Liberty Market towards Ali Zaib Road can use Main Boulevard, whereas traffic coming from Barkat Market and going towards Ali Zaib Road is using Kalma Chowk Underpass and is diverted from UCH U-turn. Authority has partially closed one side of Ali Zaib Road but for the convenience of people service lane and the other side of the road are completely functional. The 4.2 Billion project will be completed in 180 days the CEO of PCBDDA Mr.Imran Amin has also directed the National Logistic Cell (NLC) to expedite the construction work. Residents of Lahore have really high hopes for this project as it will eradicate traffic congestion and environmental hazards in the economic hub of the provincial capital.