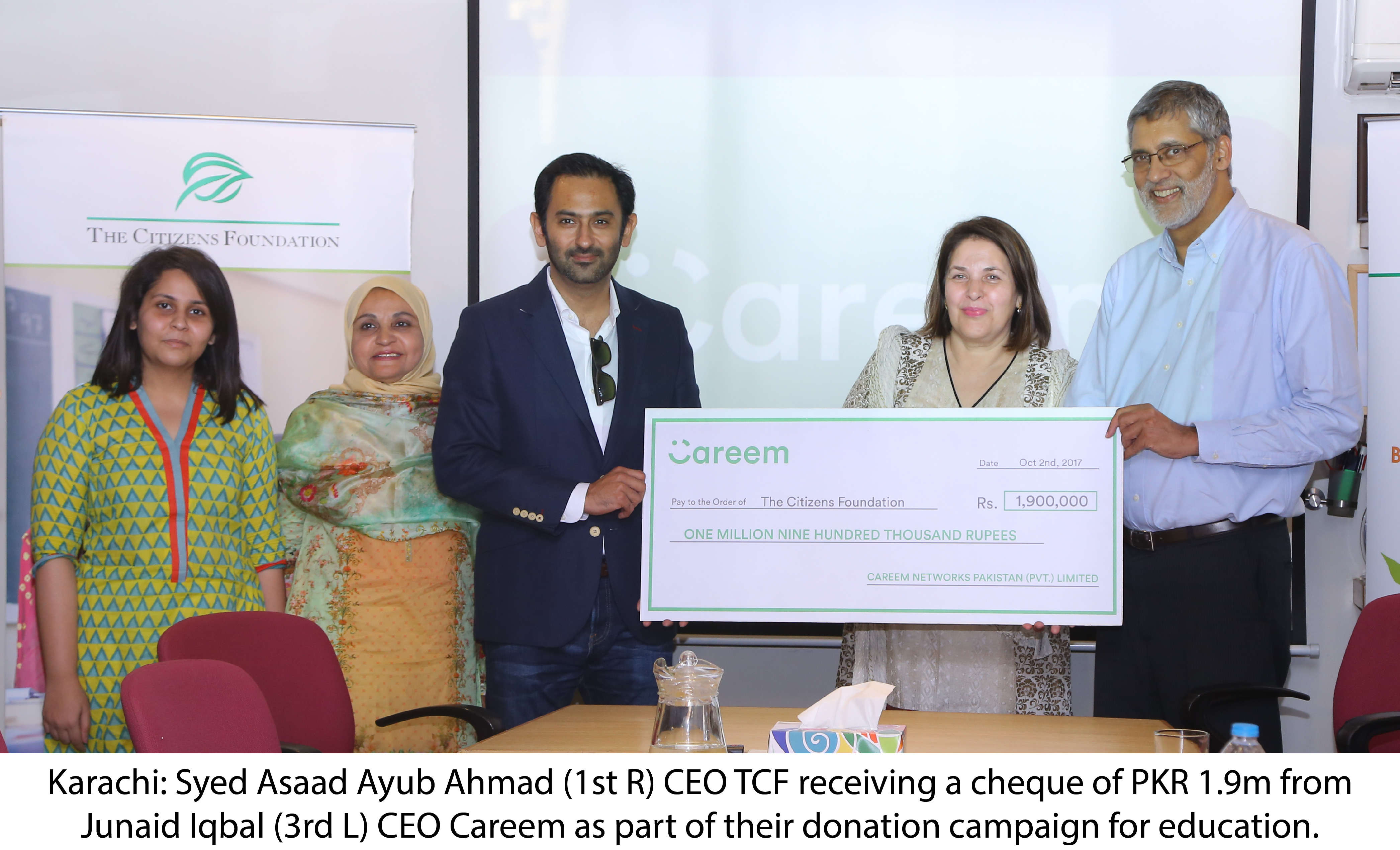 Lahore – Marking the successful conclusion of Careem’s TCF car type campaign, The Citizens Foundation (TCF) received a cheque of PKR 1.9 million from Careem in a small ceremony at TCF headquarters here in Karachi. The cheque was presented by Careem’s MD, Mr. Junaid Iqbal and received by TCF’s CEO Syed Asaad Ayub Ahmad and TCF’s Director Mrs. Bushra Afzal.The campaign was launched by Careem earlier this Ramzan in an effort to support TCF’s contribution towards educating the less privileged children of Pakistan. The donated amount will help support one TCF school unit operations for almost a year. During the month of Ramzan, Careem created a separate car type for TCF. Anyone who selected the TCF car type paid Rs. 20 above the regular GO+ cab fare. These Rs. 20 per ride were collected as donation for TCF and the campaign was promoted on social media using the hashtag #BeCareem. Careem’s CEO Junaid Iqbal generously announced to match the donations collected for TCF, hence the total donations collected were doubled by Careem.

“Careem has been a really supportive partner in TCF’s journey of making education more accessible for Pakistan’s children. With Careem’s reach in the masses they cater to, it was a great idea to introduce this car type and bring greater awareness among people about TCF’s work. The small donation for Rs. 20 allowed many more people to contribute their bit to education for the less privileged. Careem has lived up to its name and has been literally Careem or generous by matching the donations raised for TCF. We remain ever grateful for this kind gesture and look forward to our continued collaboration for a better Pakistan,” said CEO & President of TCF Syed Asaad Ayub Ahmad.

Careem plans to continue its partnership with TCF and together the two organizations aim to come up with similarly meaningful ways to create greater awareness for TCF as well as fund raising opportunities.

“As a company from the region, Careem is dedicated to simplifying the lives of our citizens. We remain committed to giving back to all communities in Pakistan– especially our underprivileged youth who should be in schools and not on the streets. We felt the urgency to act and we are immensely proud to be working with a professionally managed organization like TCF. There is absolute faith in the way they are making quality education available for the less privileged children and the transparent way in which they manage their funds. We would like to enable more donation opportunities that will allow TCF to build more schools, hire qualified teachers and ensure our children receive the best education possible,” said CEO of Careem, Junaid Iqbal.