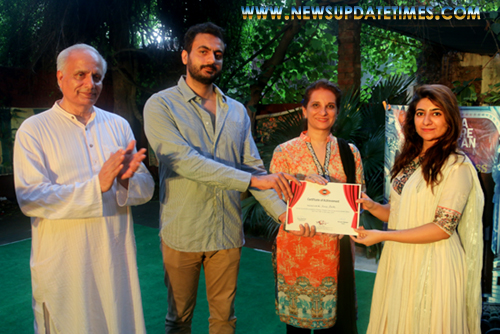 The evening was arranged is in collaboration with the International Growth Centre and was chaired by Mukulika Banerjee. Prominent British director from Round theatre London Elizabeth Lynch, Indian Scholar Sanjoy Roy and Adnan Khan were main speakers, who all spoke about space which Ajoka created for theatrical public protest against various forms of oppression.

Ajoka’s executive director Shahid Mahmood Nadeem participated in discussion via skype and shared the personal references about Madeeha’s determination and immense love for the medium of theatre. Sanjay Roy spoke about the Madeeha’s joint ventures with Indian theatre groups and said Madeeha firmly believed in cultural exchange and served as a bridge between Pakistan and Indian theatre community.

In the evening speakers also discussed the long lasting impact and social relevance of Madeeha’s path-breaking work through conversations with those who worked with her in Pakistan, India and United Kingdom. The discussion ended with a Question Answer session in which speakers highlighted the Madeeha’s creative approach, and her believe in the power of theatre to transform the society.

Raza Rumi shared that all her life, Madeeha was truly an icon of theater and Human right movements in the Pakistan. She raised the voice of oppressed segments of society through her out standing plays and used theater as a medium of social awareness. Naeem tahir highlighted the theatre scenario of 1980s before Ajoka’s inception and the impact which Ajoka made on Pakistan’s theatre landscape through its brilliant productions.

Special guest at the concluding ceremony was Ajoka’s Chairperson Zara Salman, who along with Shahid Mehmood Nadeem and trainer Nirvaan Nadeem analyzed the performances and distributed certificates among the participants. Judges also gave valuable tips while sharing their experiences with the aspiring actors.

Actor trainer Nirvaan Nadeem, who designed and conducted the workshop, said he was very happy with the response of the participants who learnt a lot in a short span of time. He said that the mere passion for acting is not enough; commitment and discipline have equal importance in order to become an excellent performer. During the workshop eminent actress Swera Nadeem and Faryal Gauhar also conducted exclusive sessions and shared their experience of acting for theatre and television with the participants. The participants in their feedback expressed their satisfaction at what they had been able to achieve in five days and appreciated the role played by trainer Nirvaan Nadeem and the opportunity provided by Ajoka theatre.

Dettol’s Golden Ticket Winners Meet Their Favorite Superheroes At The...