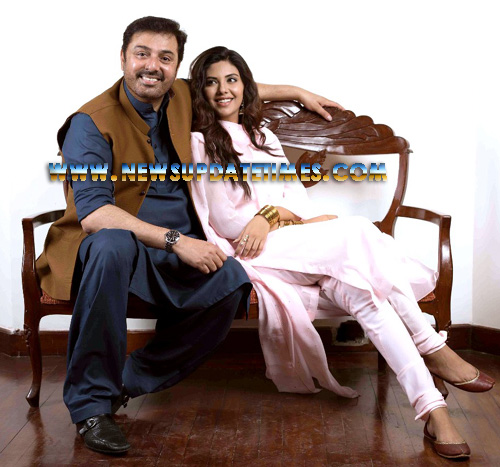 Lahore (Muhammad Yasir) The profound producer Sadia Jabbar – owner of Sadia Jabbar Productions is all set to bang with another drama serial “Ghamand”. Directed by the brilliant director Asim Ali- known for “Mere Qatil Mere Dildar” and written by one of the optimum writers Saira Raza!

Sadia Jabbar, the insightful producer is renowned for her charismatic work. Her creations encompass the romantic comedy film ‘Balu Mahi’ and the much acclaimed, popular drama serials “Mera Naam Yousaf hai” and ‘Khuda Dekh Raha Hai”. Once again, the versatile lady has come up with a plot which is going to keep the audience glued to their seats starring the multitalented “Noman Ijaz” and stunning “Sunita Marshall”; one of the renowned on-screen couples pairing after a long time and we are actually thrilled to watch this jori sizzle again.

Ghamand is a story of a woman who is the only daughter of a filthy rich businessman. The story depicts how on the basis of her wealth she believes she can own anything or anyone and how she ruins her very dear adopted child’s life due to her deceitful nature. The story revolves around her shrewd narcissist nature and how manipulatively she plays to keep her husband bound to her which eventually ends to toxic relationship with everyone around her.

The idea concludes to a point that money may bring you momentary happiness, but it won’t bring you lasting joy. Things like family, connectedness, compassion and honesty towards your relationship are what make people truly exultant.

Saba Qamar teams up with Urduflix for web series