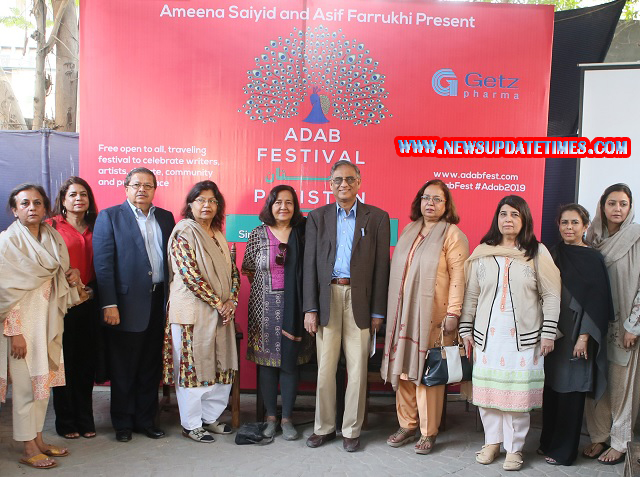 Lahore (Muhammad Yasir)  “The first Adab Festival Pakistan in partnership with Getz Pharma will be held on 1, 2, 3 February 2019 at the Sindh Governor House Karachi”. This announcement was made by Ameena Saiyid OBE and Asif Farrukhi today at the launch press conference of AdabFest 2019 at the Karachi Press Club where esteemed members of the electronic and print media were briefed by the founders about the main features of the first Adab Festival Pakistan. Details about the Getz Pharma Fiction Prize were also shared.

The organizers of Adab Fest are no longer using the name ‘Pakistan Literature Festival’ because of certain legal proceedings against the organizers, temporarily restraining them from using this name for such a festival. Adab Fest organizers are rigorously contesting such legal proceedings but since there is no legal restraint against them holding literature festivals, they have decided to give it the title of Adab Festival Pakistan (AdabFest). 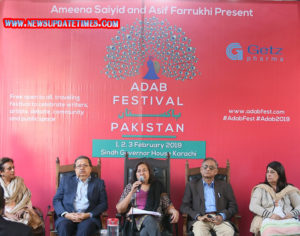 Addressing the media, Founder & Director of AdabFest Ameena Saiyid OBE said“I am delighted to announce the first Adab Festival Pakistan in Karachi to celebrate authors, writings, artists, access to knowledge, and public spaces.  Hope this becomes a movement across Pakistan”. She further said that Pakistan’s historically rich and diverse literatures and cultures have long been facing challenges, resulting in stifled diversity of expression and in stereotypes which are sometimes internalized. “At the Adab Festival Pakistan the audience will experience literature in diverse Pakistani languages, book launches, talks, interviews, discussions, mushairah / poetry sessions, a book fair, music, dance, theater, comedy/satire, and film.  Over a hundred Pakistani and international authors, intellectuals, and media personalities will be participating in the Adab Festival Pakistan. An audience of around 200,000 from the widest cross-section of society is expected to celebrate not just ideas, debate and creativity but also community and public space”, she added.

While expressing his thoughts, Founder & Director of AdabFest Asif Farrukhi stated,“With the new year begins a series of year long festivals of literary and cultural celebrations. We want this to be a regular series of events located in as many cities of the country. We want to highlight and celebrate the depth and diversity of Pakistan’s many languages and literary traditions. Our literature and authors are the best news that is coming out of Pakistan and we want the world to be as excited about these writers as possible. Let the celebrations begin”.

On Getz Pharma’s partnership with AdabFest, CEO Getz Pharma Khalid Mehmood said “We are a Pakistani pharma company and we strongly feel that the health of a nation depends not only on a healthy body but a healthy mind and a healthy soul. Without literature, art and a dialogue carried out in a democratic civil manner, the nation’s body will not have a healthy soul nor a healthy mind. It is because of this that we are supporting the Adab Festival being led by two known personalities, Ameena Saiyid and Asif Farrukhi, who have a track record of creating & inspiring many festivals throughout the country.” 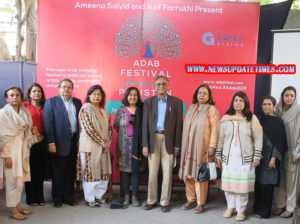