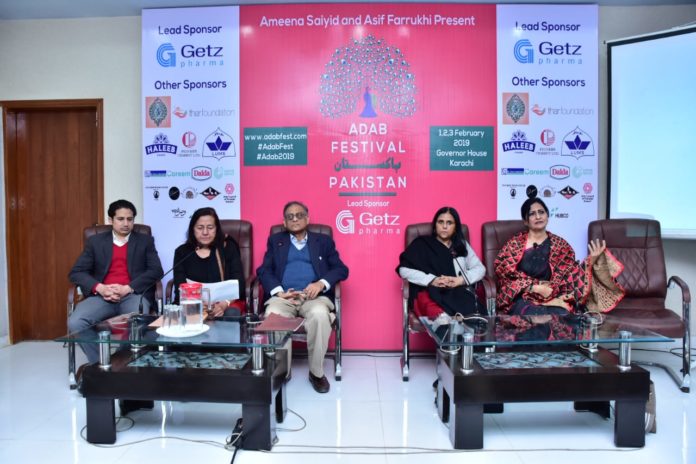 Karachi (Muhammad Yasir) “Adab Festival Pakistan (Adab Fest), opening at 315 pm on 1 February 2019, is a tapestry of literature and culture that will promote and nurture talent in writing, research, music, art, dance, theatre, etc. We want to make this a movement throughout Pakistan and get other people to organize their own festivals, and we will try to help them do so in whatever way we can” These thoughts were expressed by Ameena Saiyid OBE, SI, Chevalier des Ordres des Arts et des Lettres, Founder and Director Adab Festival Pakistan, at a press conference at the Karachi Press Club today.

The Adab Fest will be held on 1, 2, 3 February 2019 at the Sindh Governor House Karachi, the historic location where Quaid-e-Azam Mohammad Ali Jinnah took his oath as Governor General on 14 August 1947, and where he lived and died. Entrance will be from the main gate on Aiwan e Sadar road. On most days entrance into the Governor House is not allowed except for Sundays when it is open to the public, but for Adab Fest the Governor House will be open to the public for from 2 pm to 9 pm on Friday, 1 February, and from 11 am to 9 pm on Saturday and Sunday, 2 and 3 February.

Ameena said that they had rented the YMCA across the street to ensure plentiful parking for those coming in cars, and that Careem will be offering 15% discount off their fares to a maximum of Rs 80 per ride, to anyone using the promotional code AdabFest to come and go from Adab Fest.

Ameena Saiyid said that in addition to building strong linkages with academia including LUMS, Habib University, and IOBM. Adab Fest’s programme also encourages youth reading, (a book culture), youth imagination, and achievements, through, for example, a session on P. G. Wodehouse, a film screening about young women mountain-climbers (the Unknown Mountaineers), a student-run session on Umera Ahmed, the launch of Shazaf Haider’s a Firefly in the Dark and Oborne’s cricket book, a session on media literacy, among others. The audience will experience literature in diverse Pakistani languages, book launches, talks, interviews, discussions, mushairah, a book fair, music, dance, theatre, comedy/satire, and film.  Over 140 Pakistani and international authors, artists, intellectuals, and media personalities will participate. An audience of around 100,000 is expected to celebrate not just ideas, debate and creativity but also community and public space.

In his comments, Founder & Director of Adab Fest Asif Farrukhi emphasized the inclusive nature of the event and the broad scope, covering many languages, several forms of writing through celebrating the established writers and highlighting new publications to be launched during the programme. He said that “the voice of the writer, the poet, the intellectual is becoming increasingly marginalized and through such festivals this voice can be brought back to the mainstream. Important literary trends and social issues will come up for discussion offering a feast of intellectual delights”.

On Getz Pharma’s partnership as the Lead Sponsor of AdabFest, CEO Getz Pharma Khalid Mehmood said “Literature and heritage is the soul of any nation. Ameena sahiba and Asif Sahab have done a great service to this nation by founding these literary festivals. As one of our main CSR areas, we encourage these events because they go a long way in building a more tolerant, well informed and educated country.”

The organizers have issued a statement that they are no longer using the name ‘Pakistan Literature Festival’ because Oxford University Press filed legal proceedings against them temporarily restraining them from using this name for such a festival. They are rigorously contesting such legal proceedings but since there is no legal restraint against holding literature festivals, they have decided to hold it in the name of the  Adab Festival Pakistan (Adab Fest). 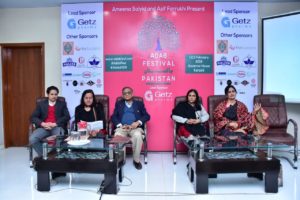 Oxford launches book on the making of Pakistani identity