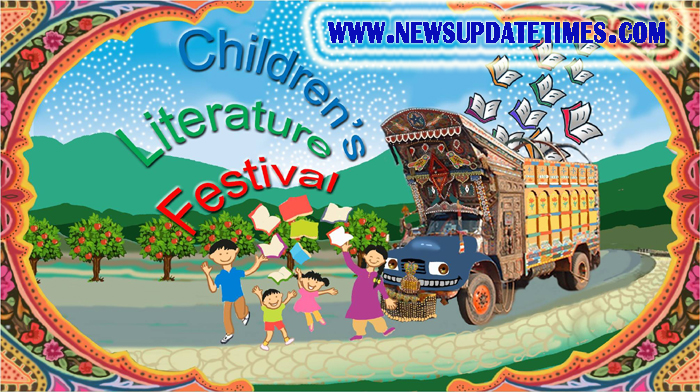 Lahore – For the first time a 3-day Children’s Literature Festival – CLF was organised by Idara-e-Taleem-o-Aagahi at the Balochistan Residential College (BRC) Turbat.  The festival was inaugurated by Mrs. Asim Bajwa, wife of Commander Southern Command. A large number of children, from Turbat, Panjgur and remote areas like Pasni participated in the festival. Former Minister Ms. Zubaida Jalal played a vital role in the organisation of the festival while the wife of Director General FC South, and other women also attended the festival.

Founder of Children’s Literature Festival (CLF) and Trustee of Idara-e-Taleem-o-Aagahi, Baela Raza Jamil expressed her happiness and said “It is very encouraging to see that the children of Turbat and other areas are aware and want access to better education facilities. Organizing a successful festival at Turbat is like a dream come true”, she added.

Former Federal Minister Zubaida Jalal said that Balochistan is the centre of traditions. “Meri Qila, Mehar Garh and Nani Mandir have been reflecting our true heritage & customs of Baloch civilizations for thousands of years”. She said that it is necessary to project the historic traditions and create awareness among the children. The last children’s event was held in 2011 and we will work together to have more such ones. She also said that we have to increase the habit of learning and make amendments in our curriculum to promote peace and tolerance.

In the session Today’s Readers, Tomorrow’s Leaders Rumana Hussain, Zubaida Jalal and Raheela Baqai, informed the enthusiastic students about the importance of reading and how it broadens not only ones vision but opens up the heart and mind. With the availability of e-books online, access has become easier. The session was moderated by Khursheed Hyder.

Eminent journalist and author Zubeida Mustafa spoke at the session Sunno, Dekho aur Bolo.  The session was interactive as children asked the author many questions.  Raheela Baqai from OUP informed the keen participants that there is more than just writing and publishing a book. Bookmaking too can be considered an art and she explained the various stages that go into the making of a book. Another star attraction at the festival was Atif Badar who had the children’s attention in an interactive talk the various stages of theatre productions .

One of the attractions at the CLF Turbat was the unique 3D images and sand art, in which the images seem realistic.  Creations by Zubair Mukhtar, Bahar Ali Gauhar and Hussain Zeb the trio from Pasni were on display on the BRC grounds. Excited children were seen at the stalls with the photography exhibition, the making of traditional Baloch music instruments and local embroideries.

The chief guest at the closing ceremony was Begum Qamar Bajwa, wife of Chief of Army Staff. She was welcomed by Ms. Zubaida Jalal and Ms. Baela Raza Jamil. The chief guest stressed on the importance of education and appreciated the organizers for arranging such a wonderful festival for the children of the Makran belt.  She visited the activity stalls and distributed prizes among winning students.