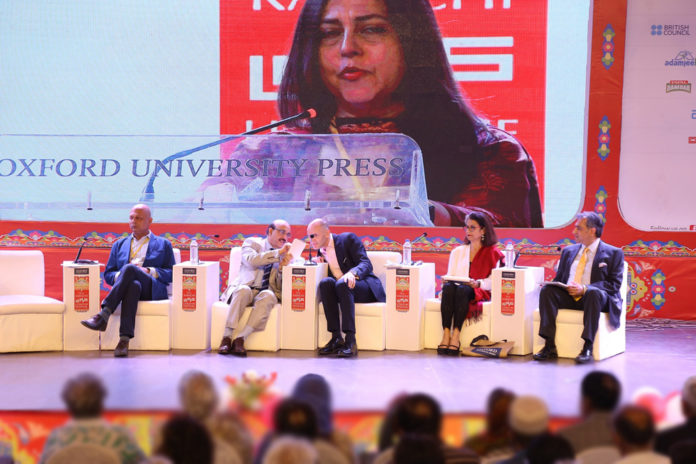 Karachi (Muhammad Yasir) The 3rd and the last day of the 11th Karachi Literature Festival drew a huge crowd of literature lovers who didn’t want to miss out any of the exciting sessions lined-up for the day.

The enthusiastic engagement of the festival visitors with the written word, authors, artists, and the literati is indicative of the inspiring ideas and debates the 11th Karachi Literature Festival generated.

Another popular session was ‘Student Politics in Pakistan: Back to the Future’ with Arooj Aurangzeb, Faisal Subzwari, Azhar Abbas, Khalid Amin, and Naghma Iqtidar as panellists and Nadeem Farooq Paracha as the moderator.

There were readings on ‘Asad Mohammad Khan: The Living Legend’ by Zia Mohyeddin.

The topic of Media Crisis: Who is Responsible? was discussed by Azhar Abbas, Mubashir Zaidi, Owais Tohid and Sabrina Toppa.

The 3rd and final day of the Karachi Literature Festival concluded with a talk by the inimitable media person Javed Jabbar. It was titled ‘Mapping Pakistan’s Cultural Evolution over the Past 72 Years’ and highlighted the very imaginative, inspiring and uplifting journey of culture and art through Pakistan’s seven decades long existence.

The Chief Guest of the Closing Ceremony, Sardar Masood Khan, President of Azad Jammu and Kashmir, while speaking on the occasion, said “Every year, Karachi Literature Festival creates a tremendous space for exchange of ideas and promotion of literature in Pakistan. It’s great to see that the festival organisers have created and sustained a literary space which was dying because of other available mediums.”

He added further, “I am glad to see that the attendees look satisfied and at peace, free enough to attend a literature festival. Unfortunately, people in occupied Kashmir do not have that luxury. I would also urge everyone to be politically correct and speak up for the Kashmiris because we are not just passive recipients of the news today, in fact we are all influencers.”

Speeches were also made by the Guest of Honour Mr Mike Nithavrianakis, British Deputy High Commissioner. Keynote speeches were made by Dr Ahdaf Soueif and Mr Harris Khalique, while a Vote of Thanks was delivered by the Festival Organizer, Mr Arshad Saeed Husain, Managing Director, Oxford University Press Pakistan.

He said, “I think you will all agree that at least, here, at KLF, there have been numerous sessions where the burning issues of the day were deliberated on by the panellists. The 11th KLF has examined the emergence of fascist nationalism in many countries, one of the deadliest examples of which is our neighbour on the east. KLF participants have reviewed the recent dangerous twist to the Kashmir dispute and the miserable plight of the Kashmiri people. World peace is threatened by turmoil and deepening tensions in the Middle East. We have analysed the issues of student activism, urban decay, climate change and Karachi’s water woes, and Pakistan’s deeply regrettable Literacy and Education Crisis. Yes, clearly, the most consequential issues of our time have indeed been focused upon in the past two and a half days.” 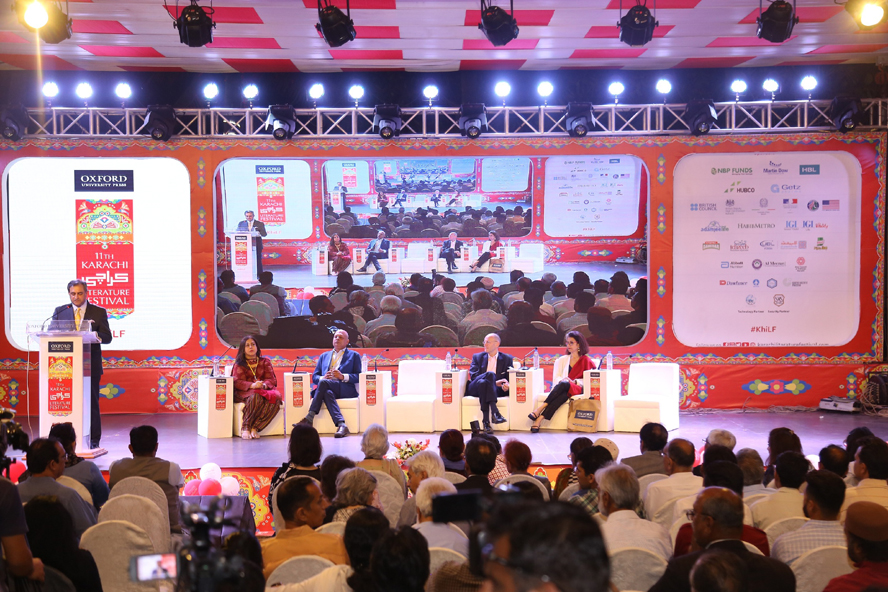 In his concluding remarks, he thanked the speakers, panellists, and performers for being part of KLF’s 11th edition; KLF Advisory Board members for their time, effort, and thought; to the media for their interest and enthusiasm; and last but not the least, to the audience who mark the success of KLF every year.