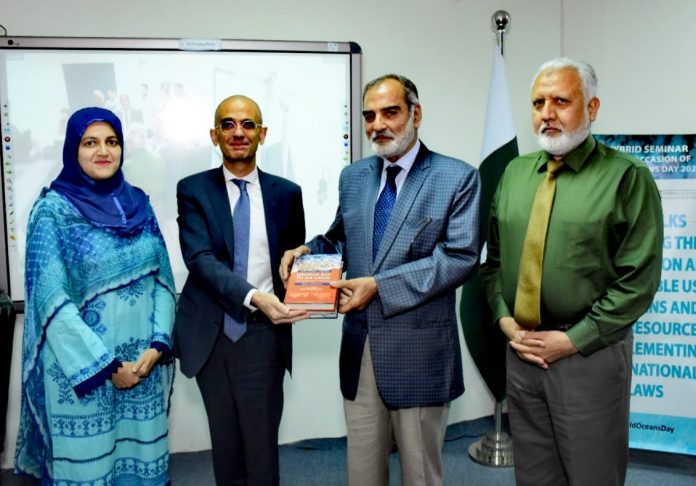 Karachi (Nut Desk)  For the conservation, protection, and management of the oceans a holistic approach is required which must include the implementation of international laws, behavioral change communication, capacity-building, employment of scientific innovations, and stakeholders’ collaboration at national, regional, and global level.

This was unanimously observed during a hybrid seminar at Bahria University titled “Blue Talks: Enhancing the Conservation and Sustainable Use of Oceans and their Resources by Implementing International Laws”, which was jointly organized by the National Institute of Maritime Affairs (NIMA), Institute of Policy Studies (IPS), and the Portuguese Embassy in Pakistan.

On the occasion, Macharia Kamau, principal secretary to Kenya’s Ministry of Foreign Affairs, also expressed his views on the topic through a video message and highlighted the significance of the oceans by highlighting that several nations have been built on the back of oceans. He urged all the stakeholders to act now at individual, communal, and governmental levels by transforming their approach and employing scientific innovations.

Khalid Rahman stated that now is the time to do more for the ocean, which is one and interconnected. He also identified the need for a behavioral change and a focus on oceans in all SDGs. He said human activities related to the sea and shores are playing havoc with the health of oceans and this state of affairs require good ocean governance. He also highlighted the need of holding educational and meaningful dialogues, seminars, and debates to recognize the problems and create awareness.

V/Admiral (r) Abdul Aleem, while highlighting the significance of a healthy ocean, stated that to make the UN’s ‘Ocean Decade’ a success story, all the countries must make concerted efforts to preserve oceans in order to preserve life on earth. In this regard, Pakistan must strive to become a maritime responsible state and understand what actions must be taken in this regard.

Rear Admiral Foad Amin Baig, while expressing his views, underscored the need to develop and adopt a humanitarian and futuristic approach towards mitigating the challenges, including the governance gaps, environmental degradation, lack of regional framework, and effective legislation. He highlighted the role of PMSA in the implementation of national and international laws in the seas and maintained that there is a need to create awareness and adhere to SDG deadlines. Lastly, he urged states to change their attitude towards the ocean.

Ambassador Pocinho spoke about the upcoming UN Ocean Conference 2022 at Lisbon (27 June – 1 July) and its significance in establishing a decisive action to move forward and forging a new international instrument to sustain and manage waters for the conservation of marine resources. He was of the view that as a maritime nation, Portugal has vast experience of marine affairs and can benefit Pakistan in many ways.

Dr. Vasco highlighted the need for the recognition of maritime environmental crimes within international law. He stated “the ocean is one” and interconnects all humanity. That is why managing oceans requires a holistic approach that must include the implementation of international laws to address and eliminate environmental crimes. He further explained how coastal communities are affected by these crimes, which are not addressed by states due to their lack of direction and awareness.

While talking about international legislation, he opined that the prevalent legal rules create complex multijurisdictional challenges that can cause a conflict of jurisdictions. He also highlighted key legal challenges in the maritime environmental domain.

Dr. Asif Inam underlined the significance of collaborative efforts by regional stakeholders toward the conservation of the Indian Ocean’s resources and the minimization of transboundary issues. He highlighted that the focus of cooperation and collaboration at the regional level must be to promote regional ocean governance to realize the global oceans agenda, respond to emerging challenges, and deliver new policies and initiatives such as blue economy.

He presented a detailed explanation of SDG 14, its targets, and the status of its achievements in the Indian Ocean and concluded that the region, Indian Ocean, and its resources are faced with multidimensional challenges from climate change and its various aspects, which then, in turn, causes decreased economic productivity and disturbances in the distribution of marine species and community structures.

Dr. Maliha discussed how the discourse of security has changed from traditional to non-traditional. While states possess better operational preparedness for traditional threats, non-traditional threats, including most maritime threats, still lack serious consideration by states. She said that the role which must be played by international organizations in governing and managing the oceans is largely missing. She also highlighted the absence of rules on the high seas which accentuate the challenges for law enforcement.

She stated that all of the 17 Sustainable Development Goals (SDGs) are relevant to oceans and, in this domain, there is a lacking of national practices, regional responses, and international actions, which must be strengthened to ensure improvement.