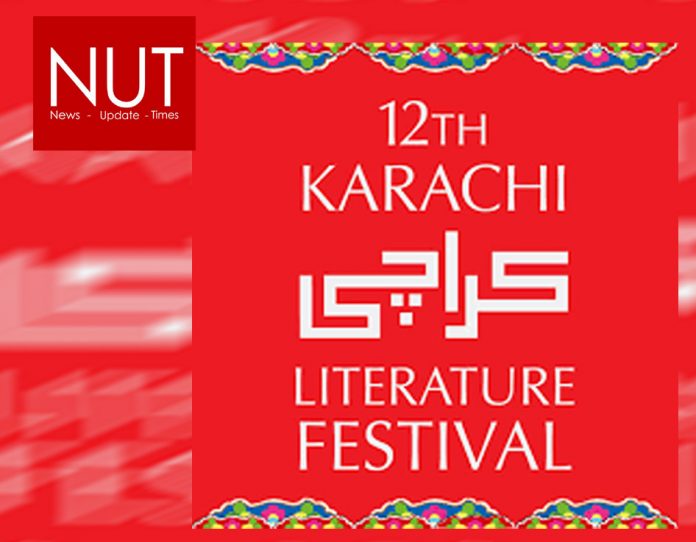 Karachi  (Muhammad Yasir) The third and final day of the 12th Karachi Literature Festival (KLF), which is being held virtually and organized by the Oxford University Press was again a day full of interesting discourse and book launches. The virtual edition of the 12th KLF was supported by many sponsors including Getz Pharma and Bank of Punjab as the lead sponsor of the event. The day started with the book launch of Agents of Change: The Problematic Landscape of Pakistan’s K-12 Education and the People Leading the Change written by Amjad Noorani and Nadeem Hussain. The book highlights the problems of school education in Pakistan and the ways forward. While accepting that school education in Pakistan suffers from serious quantitative, qualitative, and resource deficits, they see the remedies in the private sector and in the work of NGOs. The morning session also saw French-Algerian author Mohammed Moulessehoul (known by his pen-name ‘Yasmina Khadra’) discussing his writings with author and commentator Bina Shah. The afternoon session Bhooli bisri Yadein was a conversation between Kishwar Naheed with journalist Mujahid Barelvi and it was a throwing back to the feminist poet’s experiences. London-based Kashmiri author Mirza Waheed discussed his novel with Hira Azmat in a session called Tell Her Everything. The Session was introduced by Michael Houlgate, Director, British Council, Karachi. Authors Noorul Huda Shah and Yasmeen Hameed discussed the role and status of women in Pakistani literature in the session Khawateen aur Pakistani Zubanon ka Maujooda Adab. The other session running parallel was a book discussion on Ghalib: A Wilderness at my Doorstep: A Critical Biography by Mehr Afshan Farooqi. The conversation was moderated by Sharif Awan and was also joined by Dr Nomanul Haq. Every year Getz Pharma sponsors the EACPE Film Awards. The theme this year was “What have we learned from the Pandemic?” The winners were announced, and the discussion was moderated by Aisha Munim Khan. The panellist for this session were Sakina Samo, Asim Abbasi and Saqib Malik along with Khalid Mahmood, CEO and MD Getz Pharma. A fascinating and learned discussion on the intellectual history of Urdu Literature between the highly accomplished Urdu poet Zehra Nigah and the erudite and eloquent scholar of Urdu Arfa Sayeda Zehra ran parallel to the film screenings. The late afternoon sessions started with a discussion on the Pakistan’s vulnerability to Climate Change. This session was introduced by Jack Hillmeyer, Consul General, US Consulate, Karachi. The discussion shed light on the challenges that the phenomenon of Climate Change poses for Pakistan. It was a stimulating dialogue between environment activists Tabith Spence and Rina Saeed Khan and was moderated by Amy Christianson. The early evening session commenced with a discussion on the Single National Curriculum, deliberating Uniformity Vs Diversity. MD Oxford University Press Arshad Saeed Husain was joined by A.H Nayyar, Erum Kashif and Faisal Bari. The session was moderated by educationist Dr. Ayesha Razzaque. In another session, the well-known screenwriter and director Bee Gul led a panel comprising of actor/producer Sarmad Khoosat, Beo Zafar, Writer Omar Shahid Hamid and Hasan Zaidi in tackling the question of the relative merits of the printed word and the screen image. Two powerful sessions in the evening were on the Pakistani Economy and a conversation with Ben Okri. The Award-winning Nigerian author and poet Ben Okri talked about the crises of our times to journalist and author Maheen Usmani, with reference to his most recent book A Fire in my Head. He shared his poetry with the audience. The session on the Post Pandemic Economy of Pakistan was moderated by Samiullah Siddiqui and the panelist included Zafar Masud, Murtaza Syed, Dr. Ishrat Hussain and Khalil Ullah Shaikh. Day 3 ended with two authoritative sessions. In the first session called Role of Soft Power in Diplomacy, former Pakistani ambassador to the United States and the United Nations Maleeha Lodhi was in discussion with Huma Baqai, discoursing on the geo-politics of today. Finally, renowned political activists and writer Tarik Ali discussed Progressive Politics in a Populist Period alongside activists Ammar Jan and Arooj Aurangzeb and Bilal Zahoor. The session was moderated by Asma Abbas. During the three days of KLF, the digital literature festival was able to reach over 951,000 (nine hundred fifty-one thousand) people on Facebook, whereas over 100,000 (one hundred thousand) minutes of live sessions have been viewed within these past 3 days. The videos will be available online for the viewers to watch later as well. More than 80,000 views were recorded on KLF live sessions and were able to reach 600,000 (six hundred thousand) people on YouTube.