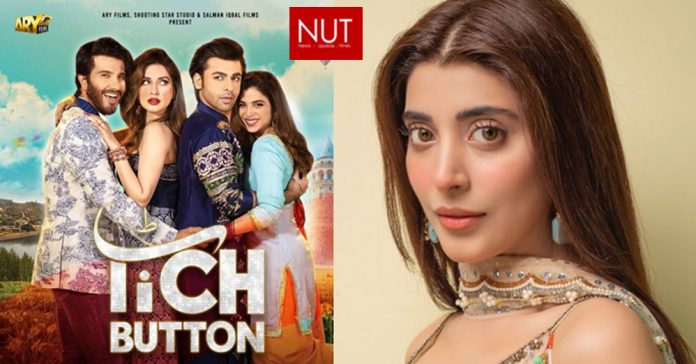 Pakistan (Muhammad Yasir) The renowned Actress Urwa Hocane, is all set to add another feather into her cap by officially becoming the Producer for her upcoming Film “Tich Button.”

Tich Button, one of the most anticipated movie of Pakistani cinema, will finally be releasing after more than two years. The film production previously experienced many delays because of the COVID outbreak, this marks Urwa Hocane’s debut as a producer. A-list performers including Feroze Khan, Farhan Saeed, Iman Aly, and Sonya Hussyn can be seen in different roles in Hocane’s debut film as a Producer.

“I absolutely love telling stories be it as an Actor or Producer.  When I went to meet Salman Iqbal CEO ARY network for this Film and told him that I am producing Tich Button he believed in my vision and said Yes to collaborating,” stated Hocane.

The film is produced by Urwa Hocane under the auspices of ARY Films, Salman Iqbal Films and Shooting Star Studio and is directed by Qasim Ali Mureed.

Urwa Hocane is also currently seen playing the leading role in the hit HUM TV serial “Meri Shehzadi” which is highly enjoyed by the audience, with Urwa garnering a lot of praise for her character and now promises that she will be seen on the big screen as an actor soon as well.

After cinema hits like Na Maloom Afraad & Punjab Nahi Jaungi as an Actor, Hocane’s debut movie as a Producer is expected to hit theatres on 11th of November.

7th Sky Entertainment Set to Rule the 9 PM Slot once...