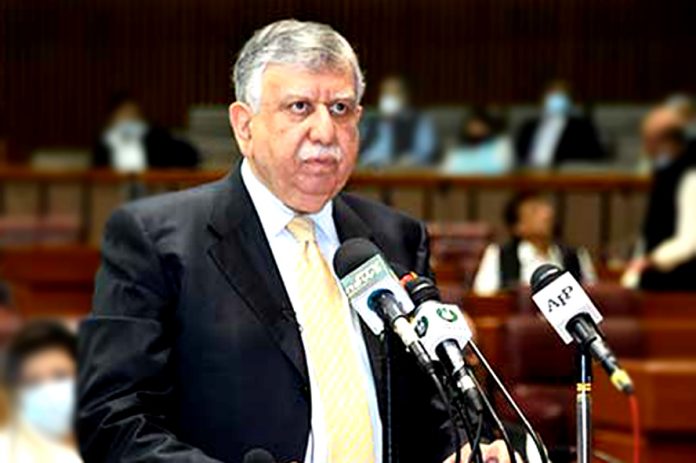 The Federal Minister for Finance and Revenue  Shaukat Tarin , unveiled the national budget 2021-22 of Rs 8trillion in the National Assembly.

He started his budget speech by stating that the biggest challenge for the incumbent government this year was to fix the national economy back on the track of recovery.

While addressing the National Assembly today, Tarin said that the Pakistan Tehreek-e-Insaf government inherited a crumbling economy that forced the government to take tough decisions.

“PM Khan took out the ill economy from the ICU with his difficult decisions,” he said that the Prime Minister Imran Khan is not afraid of making the tough decisions.

Sharing the achievements of the incumbent government, the Minister said that tax collections saw an 18 percent increase last year as the country crosses the limit of Rs4000 tax collection.

“We have made 75 percent more tax refunds,” he said.

Earlier, the federal cabinet meeting headed by Prime Minister Imran Khan approved the Budget for 2021-22, giving a nod to a 10 percent increase in salaries and pensions of the government employees.

With an increase of 36.4%, the federal government has proposed Rs900 billion for the development budget for the fiscal year 2021-22.

As per the budget 2021-22 document, the annual development budget for Punjab has been fixed at Rs500 billion for the upcoming fiscal year 2021-22 after an increase of Rs190 billion.

The budget allocated for development during current fiscal year is Rs310 billion. For Sindh, the development budget has been fixed at Rs321 billion for FY22 as compared to the current year’s Rs194 billion. The provincial budget for uplift schemes has been increased by Rs127 billion.

With an increase of Rs44 billion, the federal government has fixed Rs133 billion for Balochistan’s development. The development budget of Khyber Pakhtunkhwa (KP) has been decreased by Rs26 billion and has been fixed at Rs248 billion as compared to the current year’s budget for uplift schemes of Rs274 billion.

The growth rate for cotton has been proposed at 10% of the overall GDP projected by the federal government for the upcoming fiscal year, read the budget document.

For the industrial sector, the growth rate has been set at 6.5 per cent and 6.2% has been estimated for the manufacturing sector.

It is pertinent to be stated here that the growth target for the large manufacturing sector has been proposed at six percent, while for the construction sector it has been projected up to 8.3 percent.