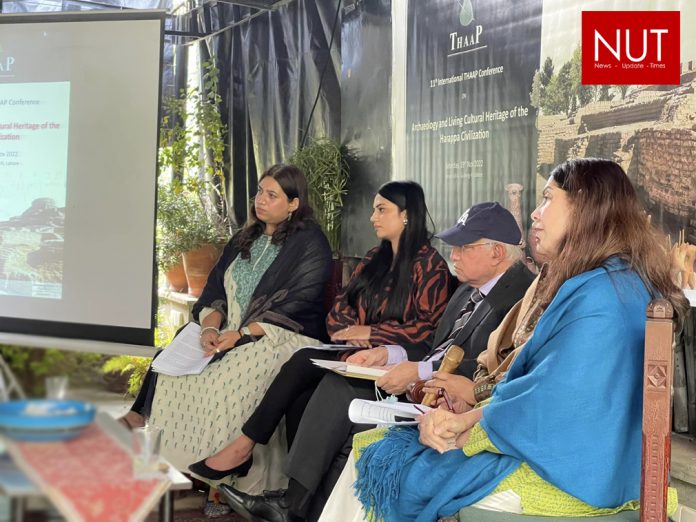 7 Thought-provoking research papers on the Archeology and living cultural heritage of the Harappa civilization were presented at the 11th International THAAP Conference.

The 11th International THAAP Conference on archaeology and the living cultural heritage of the Harappa civilization is being held today at THAAP i.e., 19 Nov 2022. The conference, composed of two paper reading sessions and a round table session also featured a cultural exhibition by artisan Allah Ditta and Digital Exhibition by the Young Archeologist Association of Pakistan.

The conference was an effort to collate and collect the works on Harappa culture in a systematic and comprehensive manner and to contribute to the body of knowledge. Historians, archaeologists, Punjabi scholars and researchers attended the conference and took great interest in thought-provoking sessions. 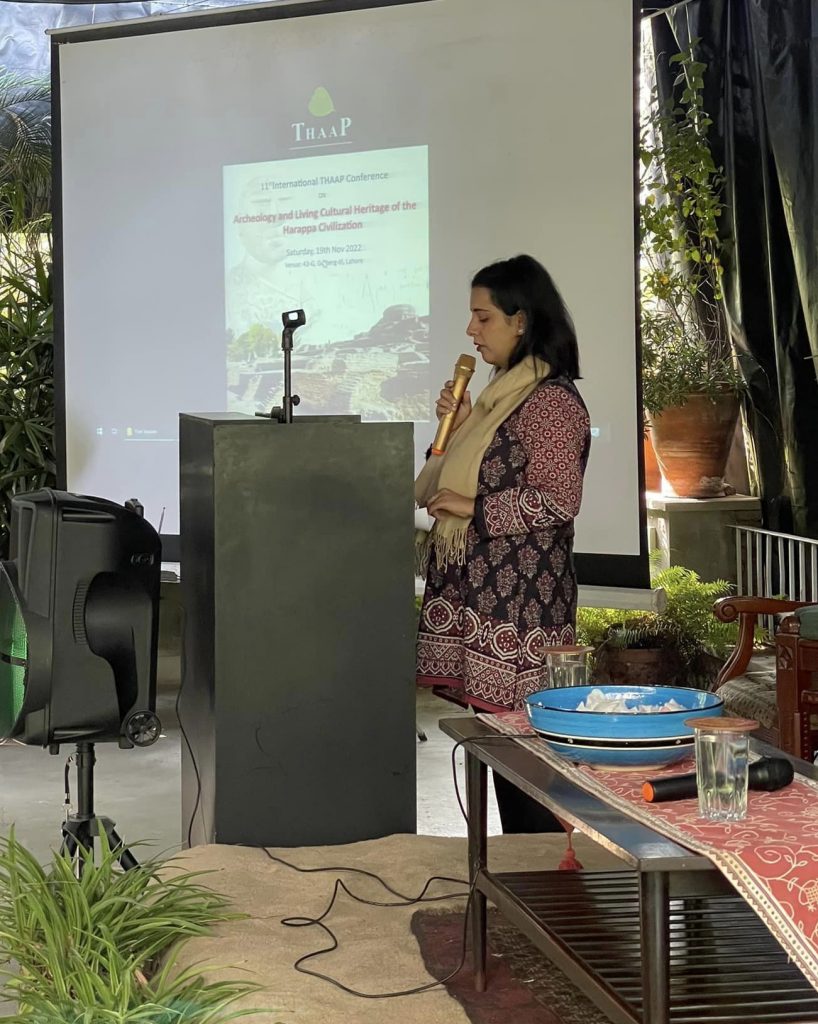 In the opening session Ar. Mehreen Mustafa, Secretary to THAAP, welcomed the conference participants and introduced the conference program briefly. Prof Sajida Haider Vandal, CEO of THAAP in her opening remarks recapped the context and history of the civilization and explained the significance of living cultural legacy and THAAP’s approach in terms of research, generation of knowledge, and its dissemination related to the theme.

The first paper reading session chaired by Prof Dr. Tariq Rehman features three research presentations. The first paper was presented by Ms. Sadia Qutub Hashmi and Ms Nomana Masood. The paper titled Symbolic Interpretation of Geometry in Indus Valley Pottery presented the analysis of geometric patterns painted on pottery excavated from the Indus Valley by breaking them down into symmetrical patterns and identifying the constituent shapes and motifs. The possible philosophical implications of the motifs were also explored in the paper. 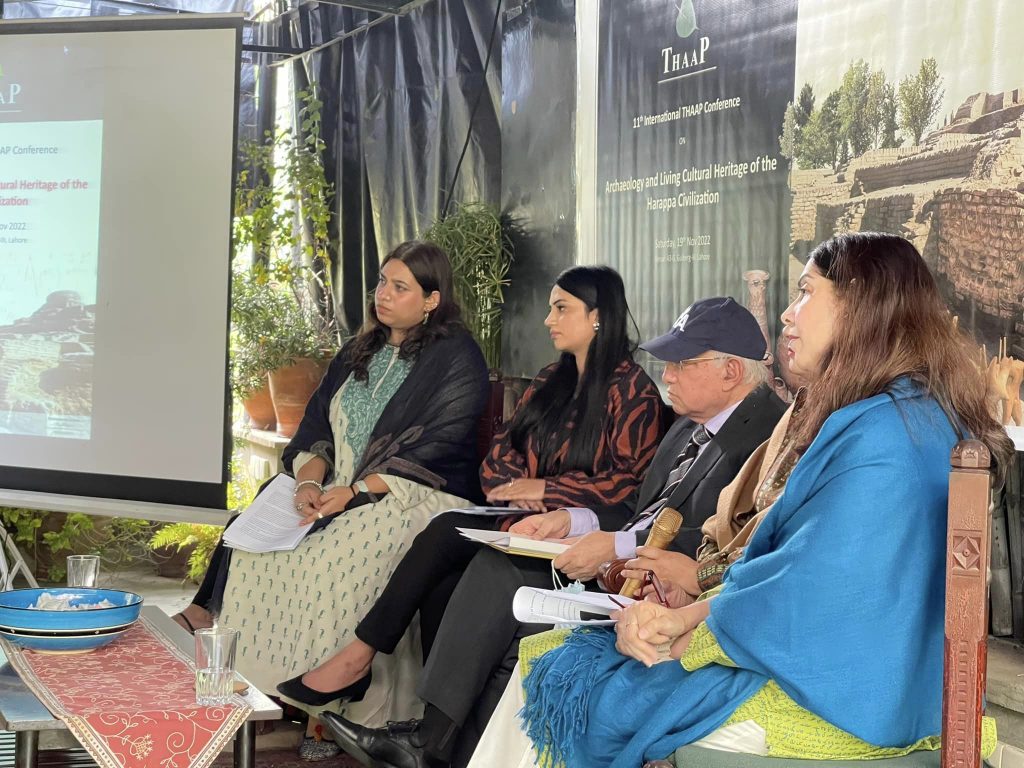 The second paper of the session titled From Craft to Art: The visual and material journey of Ghugho Ghoray as pagan terracotta horses was presented by Ms. Sumbul Natalia. The paper investigated the origin of these figurines in Harappa, from becoming a symbol of tribute at the shrine of Ghoray Shah in Lahore, to finally making appearances in the contemporary art of Pakistan. The last paper of the session was presented by Ms. Sumbal Sarfraz. Her paper titled A Journey of Fine Muslin from Harappa civilization to Modern World -Tana Banna traced the evolution of the ancient art of Tana Bana through samples excavated at Harrapa as well as references to it in early literature. The paper also demonstrates the continuity of the old techniques in contemporary textile cultures in the subcontinent.

A lively question and answer session discussed the commonalities between the cultures, traditions, as well as religions of the subcontinent as exemplified by the Harappa civilization.

In his closing remarks the chairperson of the session Prof Dr. Tariq Rahman
appreciated the consistency that THAAP has displayed in continuing with conferences that highlight the heritage of the region and keep it alive in the youth. He also shared his appreciation for the work presented by the researchers in the session.

The first paper reading session was followed by the inauguration of the cultural exhibition featuring the crafts of Harappan Artist Allah Ditta. Dr. Tariq Rehman and Prof Sajida Haider Vandal together inaugurated the exhibit, which featured terracotta figurines, jewelry, and utensils. The conference also features a digital exhibition by YAAP which highlights the significance and relevance of Harrapan artifacts such as pottery, figures, jewelry, surgical instruments, etc. extracted from the archaeological sites. 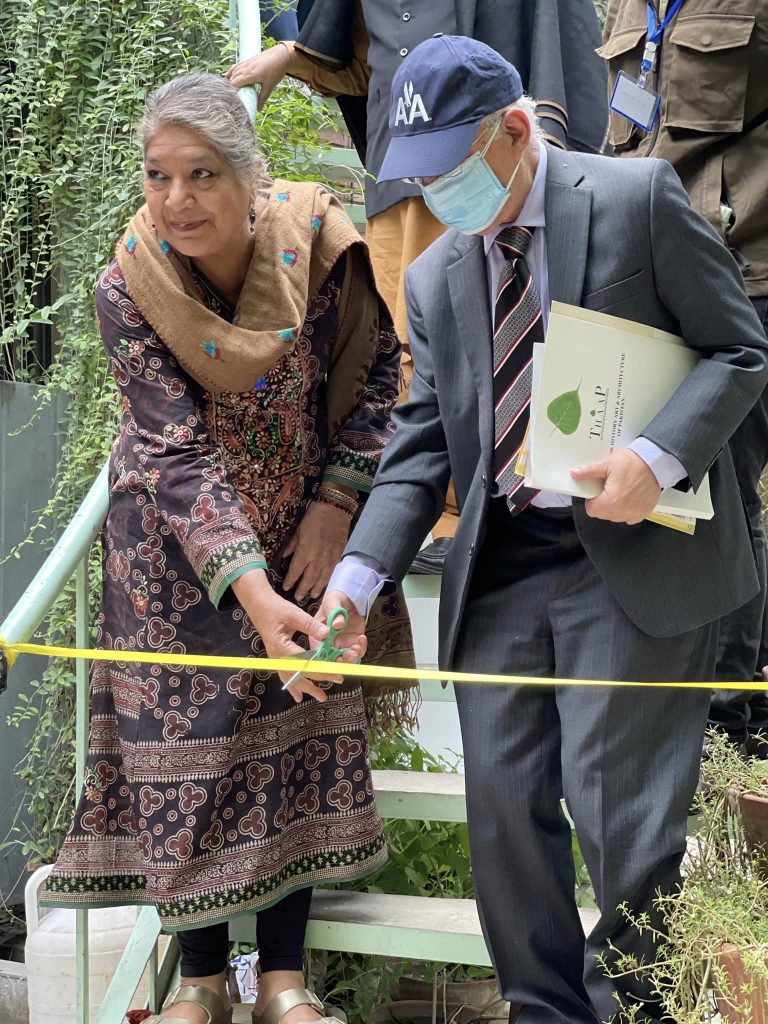 Followed by Lunch, the round table session on the theme of archaeology and the living cultural heritage of the Harappa civilization was moderated by CEO THAAP Prof Sajida Haider Vandal.

Prof. Dr. Tariq Rahman, Dean & Professor at BNU and a Language Historian spoke about the lack of historical sources needed to make the Harrapan language and script decipherable however he spoke about the traces of it still persisting in spoken languages through the retroflex sounds which are common in Dravidian languages.

Prof. Dr. Mohammad Rafique Mughal, Professor Emeritus of Archaeology, Boston University, USA, and Former Director General of Archaeology, Govt. of Pakistan commented on the social and urban organization of Harappa, ones which persist in our ways of living in current times as well. He also spoke about possible genetic links between the original Harrapan dwellers and those who live there currently. He also emphasized the need to take a collective approach to history instead of a divisive one.

Maqsood Ahmad, Director of Archaeology at the Department of Archaeology, Government of Punjab, Pakistan paid a well-deserved tribute to the efforts made by Prof. Dr. M. Rafique Mughal in understanding the Harrapan civilization. He went on to show the recent developments made by the Archaeology Department on-site and shed light on the future initiatives of the department.

Hassan Khokhar, Deputy Director of Archaeology at the Department of Archaeology, Government of the Punjab, Pakistan discussed the challenges of archeology and conservation on private land and the efforts to bring the privatized property of Harappa into public ownership.

Nain Sukh, a Punjabi Scholar pointed out the references found in Rig Veda that can hint towards the belief system of the community. He also described linguistic connections that can be established to the text in Rig Veda mentioning technical terms of carpentry, leather, and pottery works. 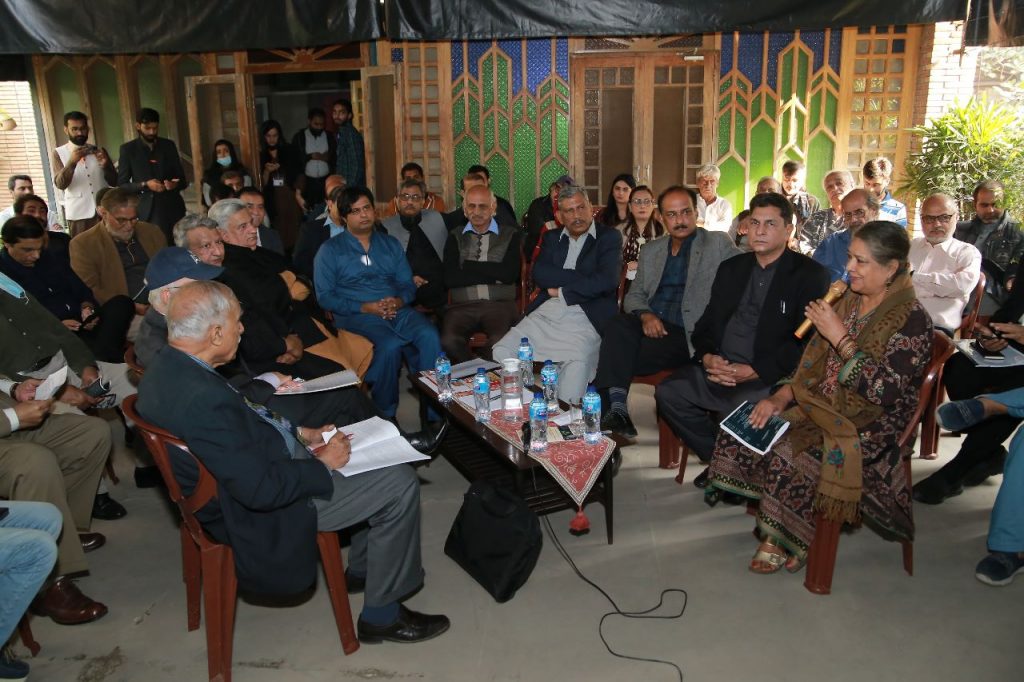 Iqbal Qaisar Punjabi Scholar & Historian emphasized that in order to understand Harappa it is essential to study the works of the Sufi saint, Baba Farid Gunj Shakar, and the founder of the Sikh religion, Baba Guru Nanak as they lived within a 60km radius of Harappa, and their description of the community and circumstances can give substantial evidence regarding the concerned subject. He also mentioned the relevance of the ancient community in the social structure described in the Punjabi folklore of Heer Ranjha.

Dr. Nadeem Omar Tarar, Gandhara Chair in Art History and Cultural Studies – University of Wah, Rawalpindi focused on the living heritage of Harappa. He discussed the links between Buddhist ruins in Sindh and their relevance with the adherents living in the vicinity. He also emphasized the need for an interdisciplinary approach as well as the need to move away from Eurocentric approaches to history to breaking new ground in research.

Shafiq Butt Development practitioner expanded upon Hassan Khokar’s words about bringing Harappa back into public ownership and gave a spirited and detailed overview of the efforts to do so spearheaded by him on the public as well as governmental levels.

Dr Tohid Ahmad Chattha, a historian mentioned how the ancient culture of Harappa is still alive for him and that in order to truly understand Harappa we need to study it in the context of other sites in the subcontinent. He also emphasized the need for establishing a formal Punjabi Research Center in educational institutions and departments in higher education institutes.

The discussion of the round table session stressed the need to engage the relevant community through cultural industries and other programs. It also delineated the need to involve young archaeologists, research, and artistic mediums such as music and theatre to highlight and celebrate the significance of Harappa Civilization.

The last paper reading session chaired by Shahid Nadeem features four research presentations. The first paper of the session was presented by Prof Dr Rifaat Saif Dar. Her paper titled Ancient Harappa in a state of Modernity explained how various research works suggest that ancient Harappa city has been most alive in her legacy than Mohenjo-Daro in the Indus Valley Civilization. The latter reflects multiple cultural traits from ancient times to contemporary times.

Asif  Mahmood Rana’s paper titled The Early Development of the Ancient Indian Religions and the Artefacts from Harappan Civilization investigated possible roots of Hinduism, Jainism, and Buddhism in Harappa through material evidence, linguistic comparison, and living traditions that test the claims of these religions originating from the region.

Dr. Khataumal presented the third paper of the session. His paper titled How to retain the legacy of the Harappan civilization in 2022 traced ancient discoveries from the ruins of Harappan civilization in the 19th century and suggest substantial metropolitan lessons to be considered for the modern age problems. The last paper of the session was presented by Iqra Azam.

Her paper titled Shiva Temple, Sukho Chak explained the geographical, historical, and political history and context of Sukho Chak and presented her archeological and architectural study of the remains of the Shiva temple in the area.

In his closing remarks, the chairperson of the last session Shahid Nadeem stressed that to keep the legacy of Harappa civilization alive we as a community and citizens need to take an interest in the study and celebration of Harappa civilization rather than leaving such endeavors purely to governments and other organizations. Additionally, he emphasized performance arts such as theatre and music as another important medium that can be employed in order to maintain the legacy of this great civilization. 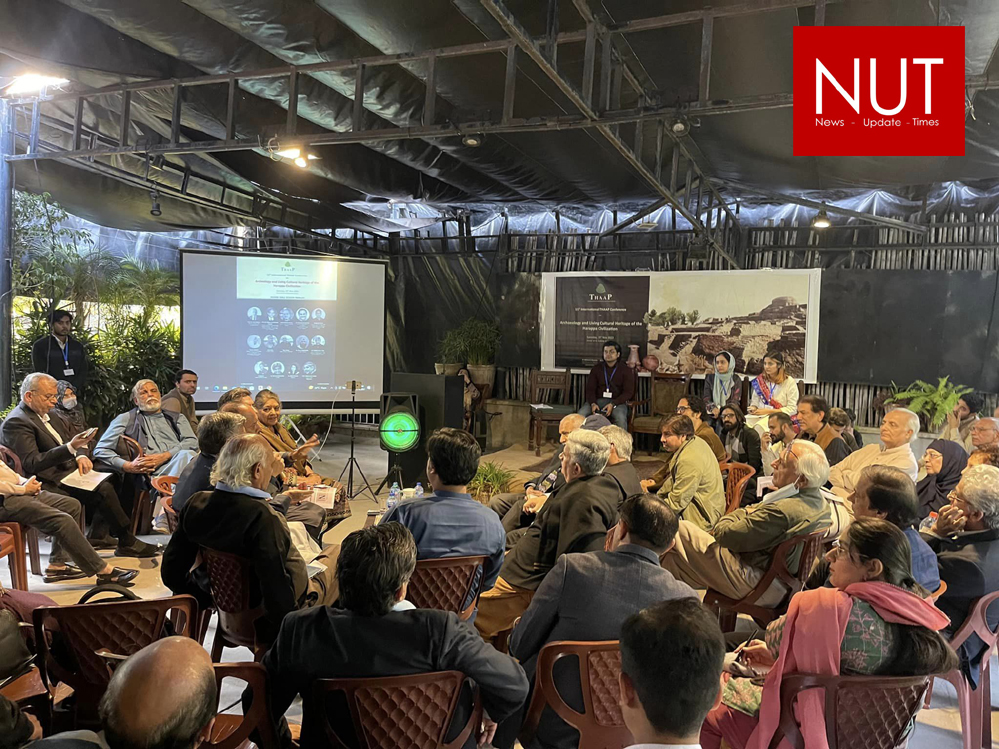 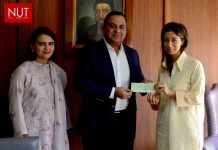 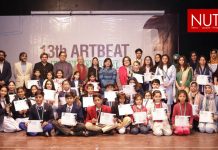 Press Statement By Board of Management Quaid-e-Azam House Museum