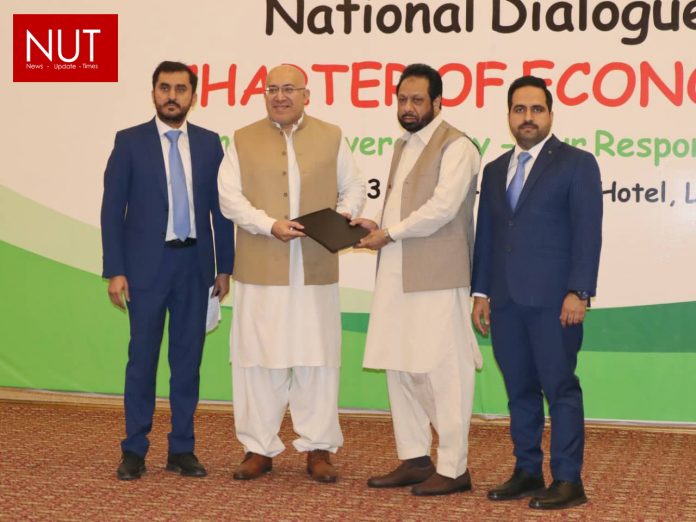 Lahore (Nut Desk) Speakers at a consultation stressed the need for launching collaborative efforts by all the national political parties to develop a ‘charter of economy’ aimed at setting the direction of the economy right and bringing it out of the quagmire it is facing presently due to weak financial situation. This is the time that the incumbent government should take difficult decisions instead of popular measures so as to put the country stand again on its feet which is presently heading towards default.

The consultation was convened by the Pakistan Business Forum’s Lahore Chapter entitled ‘National Dialogue’ to pave the way for developing a broad-based charter of economy putting all the personal and political interest aside and furthering only national interests.

He recalled his visit to London some three years back where some Indian think tanks said that India is no more interest in waging war with Pakistan but working to weaken Pakistan’s economy. He said our parties did not have shadow cabinets while in the developed world parties with even one seat form shadow cabinets so as when they come in power they have some working plan in hand to resolve the issues facing by the nation and the country. He regretted that in our country bureaucracy was ruling for the last 72 years and politicians are dependent on it because there is no tradition of doing homework before coming into power in shape of a shadow cabinet.

Chaudhry Sarwar also called for giving due recognition to overseas Pakistan who are sending US$3 billion to Pakistan. He said if we give them respect and resolve their issues, they can send double the remittances and help bringing country out of financial issues. He said currently we have only US$ 10 billion in the reserves and that was too a credit taken from the friendly countries just to keep in the reserves. He also hailed the performance of the judiciary and their role in resolving issues of overseas Pakistanis.

Deputy Chief of Jamaat-e-Islami Pakistan Liaquat Baloch said that the country direly needs a charter of democracy currently. He said that political parties should brainstorm collectively and give a complete roadmap and strategy to implement it for the next five years. He said it is the duty of the economist of the country too to give a plan to save the country from present economic turmoil.

He said that the country was passing through a critical juncture where no one was either caring for neither the constitution nor they are accepting win or loss of any political opponent. He feared that this situation may lead the country to some serious loss. Federation of Pakistan Chamber of Commerce & Industry (FPCCI) Chairman Irfan Iqbal Sheikh also advocated for developing a charter of democracy as there is no positive economic indication in the country.

He said we should rise now and save the country from default. He said we have always given attention towards politics and kept economy on second number. However, he said that if did not pay attention to the economy now then we will neither have the country nor the politics. He also voiced for banning the import of luxury items and said we did not have foreign exchange reserves for even the basics then why to import luxury items or luxury vehicles.

Lahore Chamber of Commerce & Industry (LCCI) President Mian Nauman Kabir said that it is imperative that every political party should have an economic plan. Election commission of Pakistan should not allow a party to contest the elections which has no economic plan. He regretted that the incumbent government was not aware of how to control the fuel prices situation. He said business community has least hope from the politicians.