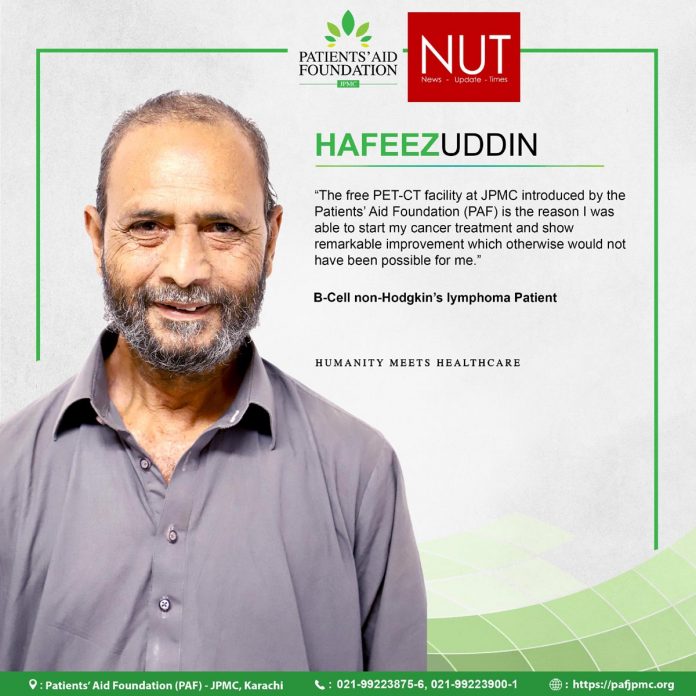 Lahore (Muhammad Yasir) Hafeezuddin Wald Hakeemuddin, a 61 year old resident of Karachi, being the father of 6 children, 3 sons and 3 daughters; great responsibilities lie on his shoulders. He works as a shoe polisher at a small factory and earns a minimum amount of 3,000 per week, making a sum of 12,000 a month. He was barely meeting the ends, however in the year 2019, things further worsened as Hafeezuddin started feeling sick. His symptoms included fever, night sweats, unexplained weight loss and fatigue. He would often share with his wife about facing trouble breathing and excruciating pain in his neck at times. He even lost his job due to his deteriorating health which made things at home very hard. At this point, his families’ concern for his health grew even more and they were starting to get terrified of what would happen in the coming future.
Keeping these concerns in mind, his wife took him to JPMC where he went through a biopsy. He was then diagnosed with B-Cell non-Hodgkin’s lymphoma and his doctors instructed him to get PET-CT in order to initiate treatment for cancer.
Positron Emission Tomography – Computed Tomography (PET-CT) uses radioactive materials along with a special camera to evaluate organ and tissue functions at a cellular level. PET-CT has revolutionized medical diagnosis, adding precision to the conclusion by producing special 3D views, which used to lack in conventional PET imaging. Each PET-CT scan session is 30 minutes long and costs about PKR 70,000 to 90,000 in Karachi. Hafeezuddin was quoted PKR 75,000 per PET-CT scan session.
Given the circumstances, Hafeezuddin was not able to work and it was already hard to make ends meet at home. His wife started sewing to manage expenses and earned just around 5,000 a month, but that soon came to an end too since her eyes were badly affected. Then, she started cooking at people’s home and started earning a little. His sons stepped in at this point and started working at the same shoe polishing factory. His daughters also helped out by sewing and applying henna to help out with the home expenses. Despite all of this, the family’s monthly income was only 19,000 per month.
His family was extremely worried and in despair. It felt nearly impossible to find an alternate solution to cover the expenses of Hafeezuddin’s treatment. However, they were all trying their best and weighing all different kinds of options.
Finally, after a lot of research his wife found out about the free of cost PET-CT facility available at JPMC which is set up by the Patients’ Aid Foundation (PAF). This is the only facility in Pakistan that provides PET-CT scanning completely free of cost.
“The free PET-CT facility at JPMC introduced by the Patients’ Aid Foundation (PAF) is the reason I was able to start my cancer treatment and show remarkable improvement which otherwise would not have been possible for me.” – Hafeezuddin wald Hakeemuddin.
With the support of the Patients’ Aid Foundation (PAF), he was able to start his treatment. The not-for-profit healthcare management organization not only gave him hope, but he also felt at complete comfort as the facility it provides is not just free of cost but it is also extremely well-constructed and clean. Even the staff, as Hafeezuddin describes, was very accommodating and friendly, gave him reassurance and always called for follow-up sessions in advance. Not even once he felt like he was getting free treatment in a public hospital.
Hafeezuddin went through a total of three PET-CT sessions. The first session was done in 2019, it was an initial scan to figure out what stage the cancer was in. Then the second session was done in 2020 and this was an interim scan to see how effective the treatment was and then finally in 2021 Hafeezuddin had his third PET-CT session which was basically a follow-up scan in order to evaluate his body’s response to the treatment and to decipher the probability of a relapse.
Since its inception, this free PET-CT scanning facility by the Patients’ Aid Foundation (PAF) at JPMC has alleviated the burden of 75,000 deserving patients, just like Hafeezuddin. Right now, 3,000 more patients are in the waiting list for the free PET-CT scanning facility who otherwise would not be able to afford it if they aren’t extended help and support. 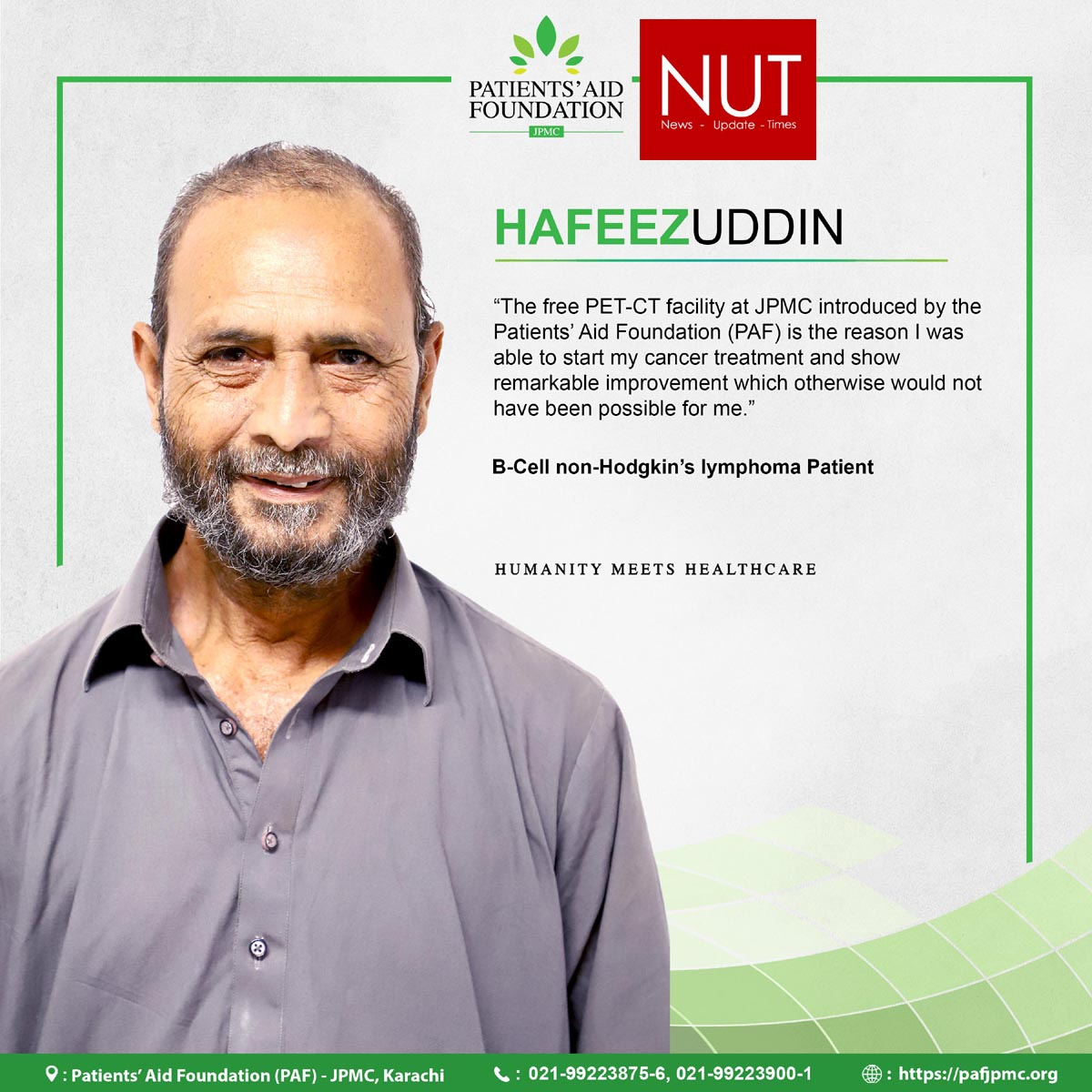