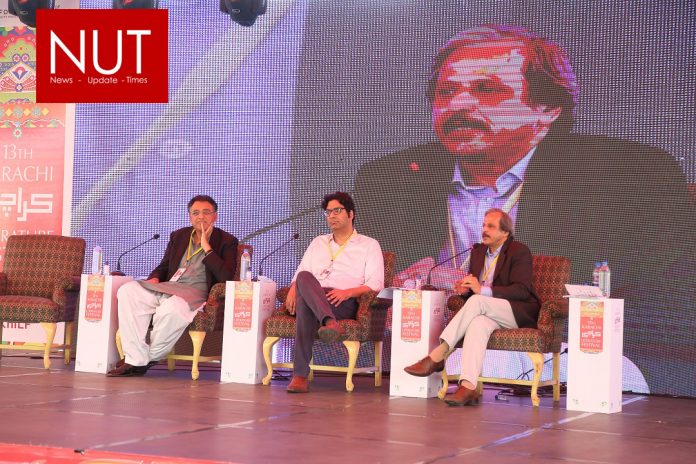 Karachi (Muhammad Yasir) The second day of the 13th Karachi Literature Festival (KLF), which is being organised by the Oxford University Press (OUP) Pakistan, from March 4 to March 6 at Beach Luxury Hotel, was again an affair full of invigorating discussions and vibrant performances.

The day began with talks on women’s contribution to Pakistani society and politics, and the changing role of art in contemporary society. Panelists in Pakistani Siyasat Aur Samaaj: Khwateen Ka Kirdar highlighted the important role women have played throughout the country’s history and regretted how so many have been held back by patriarchal restrictions, tribal holdovers and reactionary traditions.

Meanwhile, a mix of renowned sculptors and writers, art exhibition curators, and creative technologists looked at how technology was shaping contemporary art. They spoke in depth about how developments in social media were expanding the reach and impact of art and were optimistic about how the development of non-fungible tokens (NFTs) could be a boon for artists around the world.\

One of the most entertaining sessions was a talk by renowned English author Hanif Kureishi. When asked about the growing trend of moral policing in literature, he replied there was nothing new about banning books. He remarked that the most interesting books ever written had been banned and that the step acknowledged the importance of books to society. Mr Kureishi joked that he once considered burning his own books as it was an easy way to gain publicity. He concluded that literature survives, and books return to the limelight despite bans.

Another session on translation by poet Inam Nadeem and journalist Ghazi Saluahuddin spoke on the importance of translation. They noted that literature couldn’t stay alive without translation. In the absence of translation, beautiful writing would be restricted to the author’s country of birth instead of being enjoyed by the world, they added.

Two of the most eagerly awaited and well-attended sessions were the book launch of The Reluctant Republic Ethos and Mythos of Pakistan by Nadeem Farooq Paracha, and the panel session Empowered Local Governments: Essential for Strengthening Democracy that was attended by Federal Minister for Planning and Development Asad Umar, renowned journalist Mazhar Abbas and lawyer Salahuddin Ahmed.

The session on local government revolved around the importance of devolving power as the strength of democracy was associated with the importance given to its lowest tier. Asad Umar noted how dictators gave a great deal of importance to local government as it helped them consolidate their power. However, he cautioned that despite this misuse, it was a powerful concept that could improve the efficiency of governance. Lawyer Salahuddin Ahmed explained the concept of subsidiarity stating that giving decision making powers and accountability at the lowest level could ensure swift resolution of the public’s concerns.

The second day came to a close with a mushaira and a film screening of a Pakistani film on the topic of the separation of East Pakistan, Khel Khel Main, as well as a light-hearted evening with social media stars.

Why 1st July has significance in Pak history