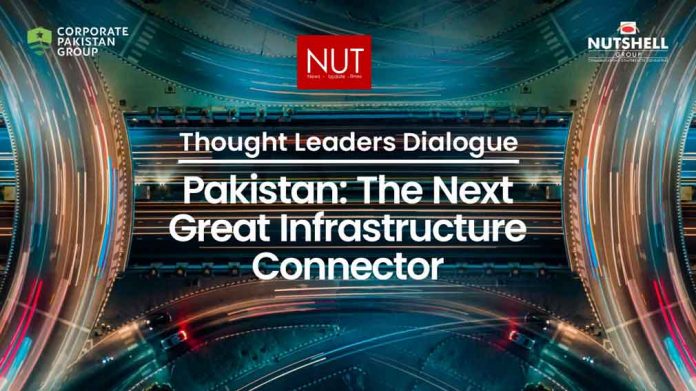 Lahore (Muhammad Yasir) CORPORATE PAKISTAN GROUP and Nutshell Group bring yet another groundbreaking event – Thought Leaders Dialogue – Pakistan: the Next Great Infrastructure Connector. The event will be held in Islamabad at a local hotel.

Ambassador Ali Jahangir Siddiqui (Former Ambassador of Pakistan to the USA) will be presenting the keynote address on the theme of the session. Other esteemed speakers include

Muhammad Azfar Ahsan, Founder of Nutshell Group and CORPORATE PAKISTAN GROUP (CPG), and Former Minister of State and Chairman of Board of Investment, believes that “Pakistan’s location is its core strength and will determine its rise as the most influential of energy corridors for regional prosperity. It will also directly impact and improve Pakistan’s prosperity, stability, and security.’’

Nutshell Group and CPG Leadership found the article by Ambassador Ali Jehangir Siddique on ‘Pakistan: The Next Great Infrastructure Connector,’ published by Atlantic Council Global Energy Sector and Atlantic Council South Asia Sector, to be a perfect reason to curate this Dialogue. The geo-strategic position has been Pakistan’s strength since its inception. Pakistan provides the key corridor to both China and Central Asia. Its location and the potential opportunities associated with it, have always been instrumental in shaping its foreign policy and economic progress.

Opportunities for connectivity in terms of trade, digital and overall economic impact, are crucial for Pakistan as a corridor. The Dialogue will be a significant step toward an understanding of working with and formulating the best policies to benefit from this conduit.

With Belt and Road Initiatives (BRI) and changing political dynamics, Pakistan’s position can and will be an important element in regional commerce. Nutshell Group and CPG, through this Dialogue, will bring the audience’s and stakeholders’ focus on the significance of Pakistan as a regional energy, infrastructure, and digital connector and corridor. It will also outline the policies that will be needed to best utilize this conduit. Historically, Pakistan has not been short of a good policy structure, but the implementation of the same has been a challenge. It is this challenge that the Dialogue will be resolving for establishment of the most effective infrastructure for connectivity in all aspects. An impressive array of speakers belonging to domains ranging from Banking, Economics, and Public Policy to Digital Space and National Security, as well as experts from the corporate sector and the Government, will be sharing their expert views and putting together recommendations for the way forward. Nutshell and CPG are both focused on providing support and facilitation in helping public and private sector stakeholders for Pakistan’s rise in the region, which will favorably impact Pakistan’s economy.