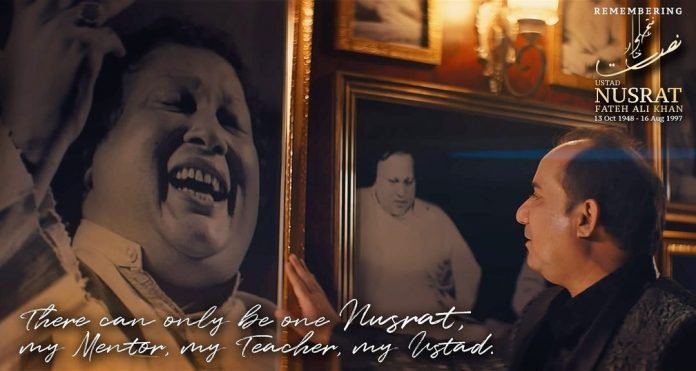 The “Zaroori tha” singer took to Instagram early on Monday, Aug 16, to share a picture of himself next to a portrait of the Shahenshah-e-Qawwali (King of Qawwali). The picture also featured special text that read, “There can only be one Nusrat, my mentor, my teacher and my ustad.”

Rahat Fateh also penned a simple yet touching tribute in the caption, which said, “Always in our hearts Ustad Nusrat Fateh Ali Khan. The legend.”

Hailing from Faisalabad, Nusrat Fateh Ali Khan carried forward his family’s 600-year-old Qawwali tradition and introduced it to international audiences. He died on August 16, 1997, but is still alive in the hearts of music lovers.

He received recognition for his exceptional work in the form of numerous accolades; apart from being a Grammy nominee, he received UNESCO Music Prize and the ‘Legends’ award at the UK Asian Music Awards in 2005.