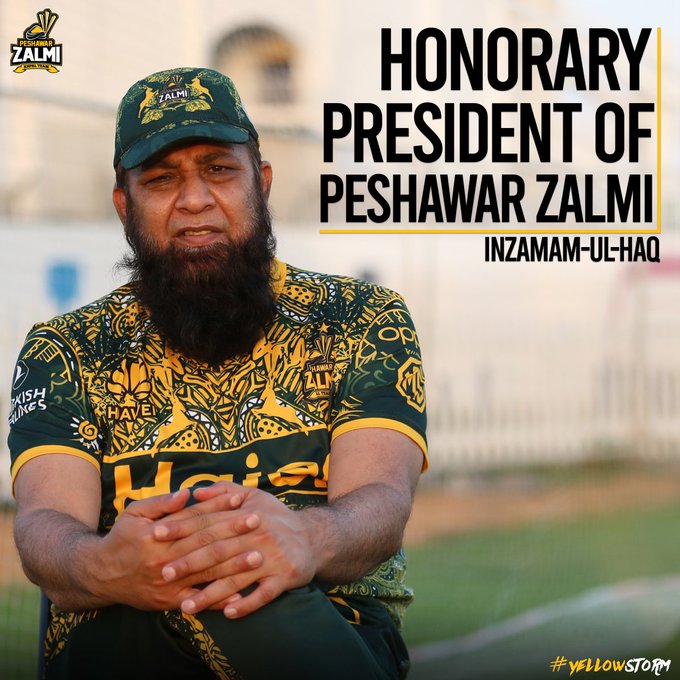 Pakistani batting great Inzamam ul Haq has been appointed the president of Pakistan Super League (PSL) franchise Peshawar Zalmi weeks ahead of the mega sports event of the country.

The much-awaited seventh edition of the PSL is starting January 27. Peshawar Zalmi announced the news on their official Twitter account on Thursday.

The veteran cricketer had been affiliated with the Yellow Storm as a mentor in the last season of PSL. Javed Afridi, chairman of Peshawar Zalmi welcomed Inzamam once again to the “Zalmi family”.

“Izamam ul Haq is a legend and his inclusion would benefit the Zalmi cricketers,” said Afridi.

He said that the cricketers will get to learn a lot from Inzamam. Earlier, on Wednesday, Peshawar Zalmi unveiled the playing jersey for the much-anticipated seventh edition of the PSL. According to a statement issued by the franchise, the Zalmi Kit is designed to represent the historic city of Peshawar and Pakistan’s national animal Markhor.

“The traditional designs of Peshawar, which is also known as the city of flowers, has been included in the kit, as well as representation of historic locations of Peshawar and Khyber Pakhtunkhwa including Islamia College, Ghantaghar Peshawar, Khyber Pass and K2,” the statement highlighted.

The PSL’s latest edition will be played in Karachi from January 27 to February 7 and in Lahore from February 10-27. The first match will be staged under the lights of the National Stadium, where Karachi Kings and Multan Sultans will go head-to-head.