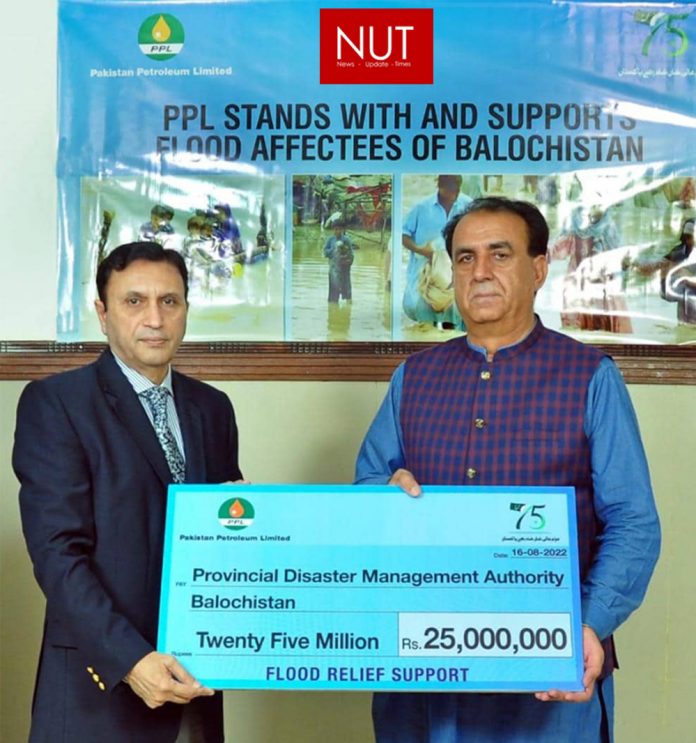 Karachi (Muhammad Yasir) As a leading national E&P company, Pakistan Petroleum Limited (PPL) has once again stepped up at the time of national flood emergency, to provide assistance to disaster-hit communities of Balochistan. PPL’s Board of Directors approved Rs. 25 million for the rehabilitation of the affected local communities in the recent floods in Balochistan.

The donation cheque was presented by GMCS Syed Mahmood Ul Hassan to Director General, Provincial Disaster Management Authority (PDMA), Balochistan Naseer Ahmed Nasir in Quetta on August 22. Recent rain and flash floods have affected almost the entire Balochistan and southern Punjab besides parts of Sindh. It has also caused substantial loss of human lives and has severely damaged the infrastructure, resulting in major displacement of families in the affected areas. PPL’s financial assistance is aimed at supporting relevant local civil administrations who are taking necessary measures to provide relief to citizens.

As a national company, PPL has always been in the forefront of supplementing the government’s efforts by providing immediate relief, medical assistance and rehabilitation of victims of emergencies. The company has generously supported local communities and area administrations through funds, medical camps and rehabilitation facilities during 2005 and 2013 earthquakes and repeated floods during 2010, 2011 and 2012 in Sindh and Balochistan.

As a result of its consistent efforts over the years to improve the quality of life for deserving population in the country, PPL has received the leading Corporate Philanthropy Award from Pakistan Centre for Philanthropy for 16 years, as the largest corporate giver in terms of volume of donations.

Mondelez International Facilitates Over 22 million PKR for Flood Rehabilitation in...