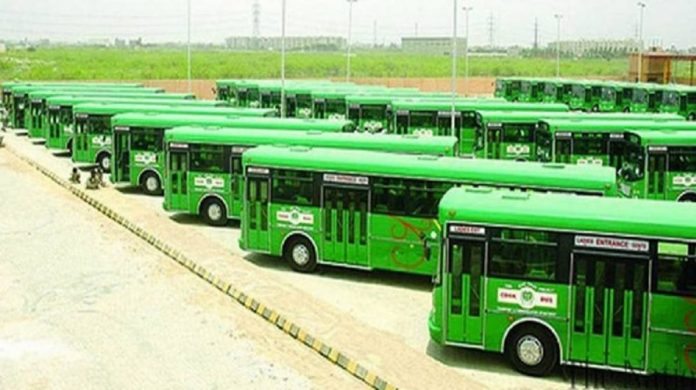 PM Imran Khan was also briefed by the operations of the mass transit system project, the city was waiting for a long.

Addressing the inaugural ceremony, PM Imran Khan congratulated Javed Qureshi, Asad Umar and Imran Ismail for their vigorous efforts for the launch of the mega project.The premier said the past government did nothing for the development of Karachi and we saw the megacity being destroyed with our own eyes.

He said that Karachi is the growth engine of Pakistan and upliftment of the city means upliftment of Pakistan. The prime minister said the Green Line Bus project will be fully functional by the mid of January.Giving the example of Tehran, PM Imran Khan said Karachi cannot be transformed into a modern city until the removal of administrative flaws.

“Despite international sanctions, Tehran is a modern city,” he added.

Commenting on the water issue of Karachi, the premier said, he is personally monitoring the K4 project. He asked the Sindh government to reconsider their decision on the Bundal Island as the development on the island will ultimately benefit the province.

PM to inaugurate Sukkur-Hyd Motorway in 2 to 3 months: Umar

Speaking on the occasion, Federal Minister for Planning and Development Asad Umar said the incumbent federal government will continue to uplift Sindh province especially Karachi as it is the economic hub of the country.

He ruled out the claims of Pakistan Muslim League-Nawaz about completing the infrastructure of the Green Line Bus project and added that PML-N gave no mega projects to Karachi.

He also criticized Pakistan People’s Party (PPP) chairman Bilawal Bhutto Zardari and asked what Sindh’s ruling party has done for the province including Karachi from the past 13 years.

The route and stations

The 80 buses will be operated by 200 drivers who have completed their training. Around 22 stations between Surjani Town and Numaish Chowrangi have been completed. Another three stations to extend the service to Municipal Park are yet to be constructed.

The government has yet to announce the ticket prices for the Green Line BRT project. However, according to experts, the government will set Rs15 minimum and Rs55 maximum prices for bus service.

Karachi’s Green Line BRT project with intersections is 22 km long which includes 12.7 km elevated, 10.9 km at grade, and 422 meters underground, and has 25 stations.

The phase-II common corridor from Gurumandir up to Municipal Park with a length of 2.5 km has two underpasses at M.A Jinnah Road.

The state-of-art underground bus terminal with a parking facility and the commercial mezzanine floor was also constructed at Numaish intersection.

KPK Special Assistance on Industry and Commerce met with PFMA