This collaboration was agreed upon after the two sides signed an agreement during a ceremony held in Lahore on Monday.

Senior officials of both the organizations, academicians and guest students were also present on the occasion.

As per details, the scope of this collaboration will allow Pearson and the Cornerstone Schools to continue collaborating for Pearson Edexcel exams, supporting resources and professional development courses at the Global Campus, Lahore

On the other hand, the CSCG campus will offer to students all suits of Pearson qualifications including Early Years, Int. GCSE and A level exams, support Pearson’s qualifications monitoring process, introduce the programs at their all campuses and branches.

In her remarks on the occasion, Wajeeha Raoof expressed her full confidence in the academic programs development capacities of the Pearson and said that our students will be able to get the Pearson Edexcel qualifications to potentially enter the arena of international education in renowned educational institutions.

Kathryn Booth appreciated the leadership of Cornerstone Schools for their ongoing collaboration with Pearson through their valued partnership of seven years. She highlighted the significance of Pearson Edexcel qualifications saying the students at the Cornerstone global campus will get a rich opportunity to equip themselves with critical skills to enable them to succeed in future education and the world of work.

At the conclusion of the ceremony, a question-answer session was also held where the audience raised a number of questions regarding this collaboration and future prospects as well. 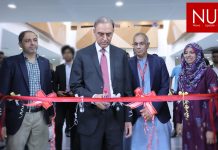