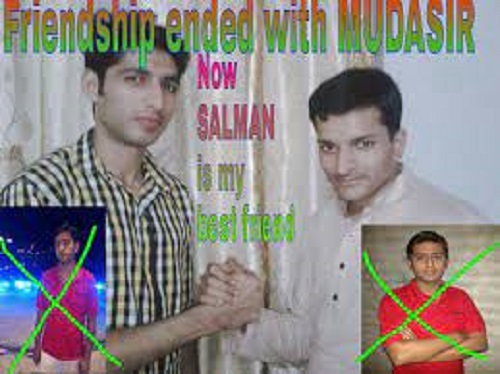 Alter, a Lahore and London-based startup, auctioned Pakistan’s first NFT meme ‘Friendship ended with Mudasir’ from Gujranwala for 20 Ether or $53,171 on Sunday.

“It is a life-changing moment for the creators,” Alter’s Co-founder Zain Naqvi said.

“Friendship ended with Mudasir: Now Salman is my best friend” is a famous Pakistani meme, probably the first one that went viral on the internet in 2015.

The meme was posted by Muhammad Asif Ali Rana. He posted a photo with his friend on his Facebook account. Both of them were shaking hands. The image had bold and colourful text that read,

The original post, which showed Mudasir’s crossed images at the bottom, received 10,000 shares. The meme “Friendship Ended with Mudasir” spun various iterations, from showcasing the internal conflicts of characters from the Marvel Cinematic Universe and Star Wars to the battle for YouTube dominance between Indian Media Giant T-series and Youtuber PewDiePew, to American politics showcasing the transfer of power between the Democrats and the Republicans. The simple meme from the lads from Gujranwala has global admiration and resonance.

The meme was auctioned on Foundation, the world’s largest platform for NFT listings, Zain Naqvi, Alter’s Co-founder told SAMAA Digital. The minimum bid price was 1 Ethereum token or $2320 (at 2:44 pst on July 29). It sold for 20 Ether. Ether is trading around $2562 at 9am on Aug 2.

NFTs are digital codes linked to blockchain technology. It is stored on a decentralised public ledger that certifies any digital file to be unique. They are digital identifiers that can’t be copied.

Think of an NFT as fingerprints that are unique. They have become increasingly popular tool because of their use cases. For example, they have created an entirely new digital art industry worth more than $1b by solving the biggest problem artists faced: copying.

In March, artist Mike Winkelmann, who goes by Beeple, sold the world’s first virtual NFT artwork for $69m at Christie’s, a famous auction. Earlier this week, Polish influencer Marta Rentel sold her emotions through NFT (a digital token) for $250,000.

Twitter adds new feature to remove followers without blocking them