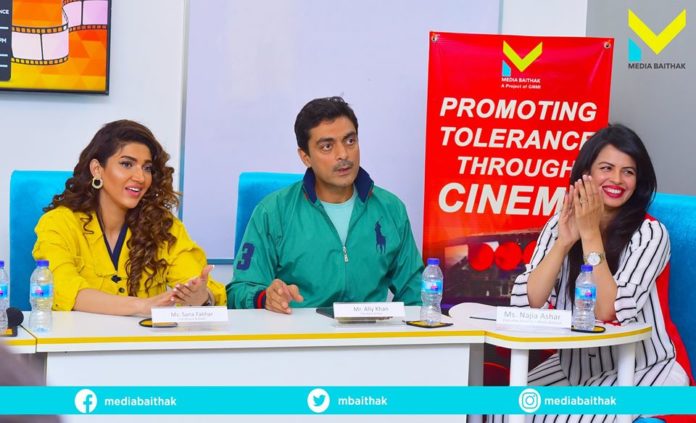 The topic of cinema and how it can rejuvenate harmony and peace in the society was explored.

‘We cant remain fixated with the 70’s, we must learn to evolve with the times’ said superstar, Alyy Khan. 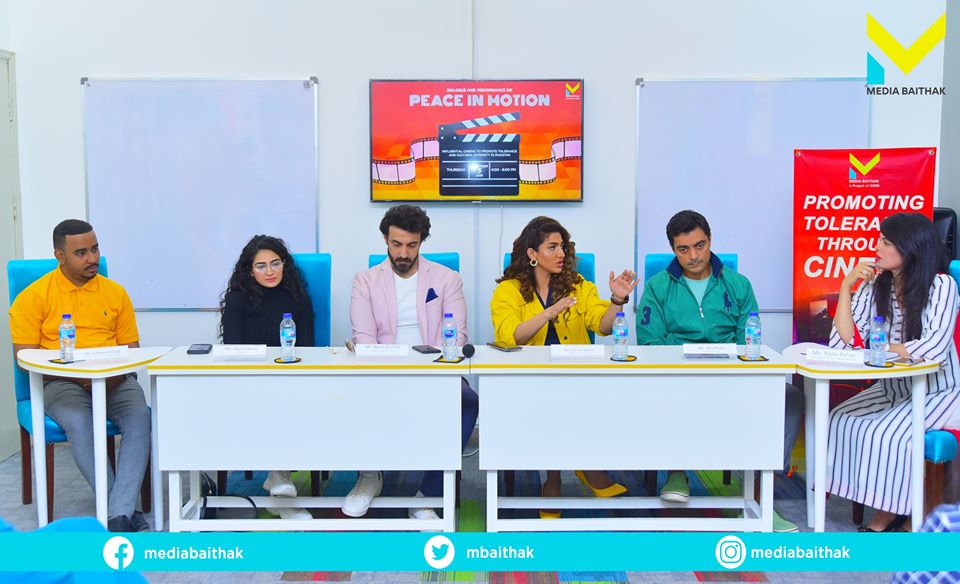 Karachi (Muhammad Yasir) Society is a reflection of film and film is a symptom of society, that is the message that actor and model Sana Fakhar led the conversation with. Pakistan was once a nation that had over a thousand cinemas and going to cinemas was once a favourite pastime in the country. Now however not only does the local film industry produce very few films, the audience for those films is almost non-existent. The dialogue and performance at Media Baithak discussed the reasons for this and how the art form of cinema can be harnessed to increase peace and tolerance in the people and the nation.

The session on the 5th of December, 2019 was attended by media persons, educators, civil society organizations and film enthusiasts. The panel was composed of Faheem Shad, filmmaker and countering violent extremism activist, Aamir Qureshi, actor and storyteller, Hajra Yamin, actor, Sana Fakhar, actor and model and Alyy Khan, actor and host. Their collective expertise and experience shed light on the reasons for why cinema is a struggling industry in Pakistan and the ways in which it can and is being used to bring values to the society. 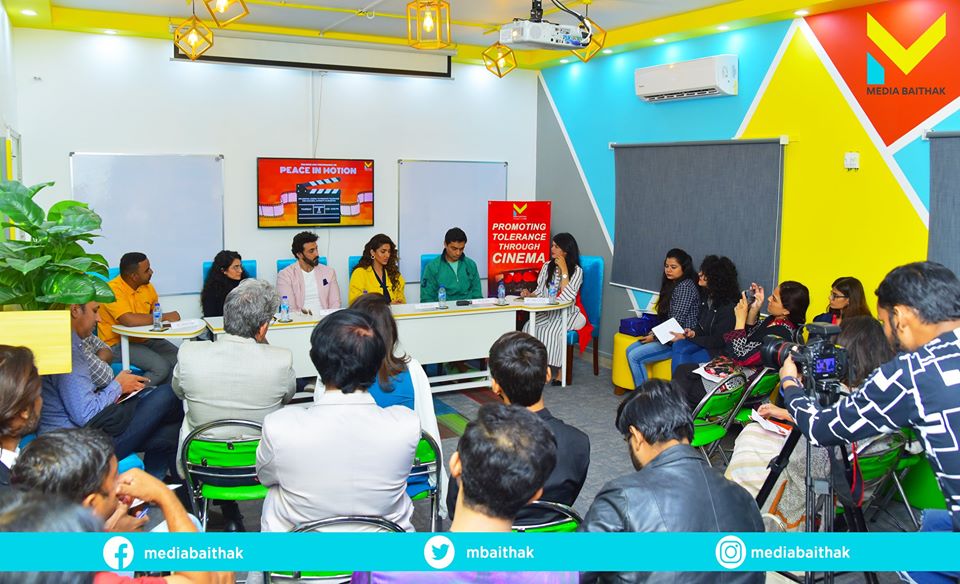 Sana Fakhar was of the opinion that cinema is not being used as a form of art at all presently but more or less as a simple vehicle of entertainment and a means to provide the audience with escapism for a few hours. Alyy Khan stated that the reason that there is violence in films is so that the bigger evil is portrayed the more value the hero will have in defeating it. Additionally he said that due to the fact that Pakistani dramas cover every valuable social topic so impeccably, it discourages the viewer from paying for film, when they can simply enjoy better content on television for free. 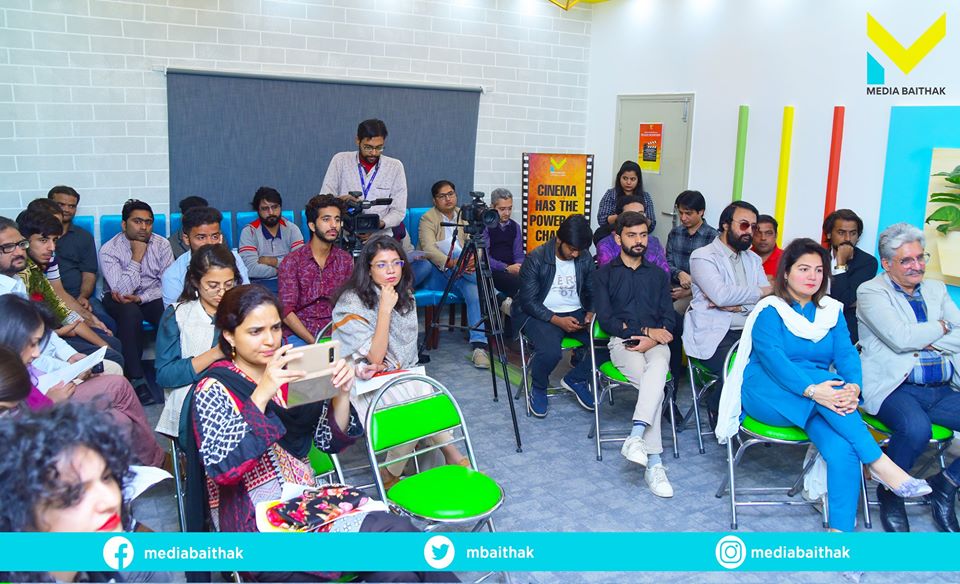 “Cinema is not being run by filmmakers or people with training in media, it is being run by businessmen,” said Aamir Qureshi in light of the reasons why cinema is not producing the sort of contribution to the social narrative that can increase a sense of ethics and values in the community.  He also said that after having worked with film students of the newer generation, he is hopeful about the industry flourishing in the future. ‘The new generation will not be plagiarizing ideas from India the way the previous generations have been doing, they will be inspired by Hollywood and legitimate filmmakers.”

Hajra Yamin, one of the younger actors in the industry, was critical of how inaccessible cinema is for the average person “if the cinematic experience costs Rs. 2000, how can we possibly expect to revive the industry.” For the depiction of women being the stereotypical victim or succubus, Yamin said that the actor is the bridge between the producer and the audience and according to the audience they have begun to find this stereotyping of women to be tedious and demand a change. The producer however is reluctant and quite often the fragile male ego is unwilling to conform to the new age with new ideals. This has placed the entertainment media industry in a limbo where the artist and audience are not being heard and the producer and director are detached from the changing tides.

Faheem Shad, working from Lyari in Karachi spoke in great detail about how the state and CSO’s imagine that underprivileged and areas under conflict simply need food, water and shelter, but they neglect to provide art, culture and education. Aside from food, the people also need to be nourished spiritually and psychologically as well. Shad then relayed how his project to screen films in Lyari were met with enthusiasm and community involvement, since cinema, once a vibrant pastime of the region, is now almost non-existent. “Not everyone has a television, let alone smartphone, where I come from, so cinema provides relief and peace to ones soul, where finally the people can find respite.”

During the question and answer session, the audience seemed to be placing the responsibility of the entire society’s’ ills upon the acting community and film industry to which Yamin contributed that neither are actors law makers nor are they educators, they are people who reflect the society and the embody the characters that are the ingredients of said society. Qureshi encouraged the audience to pursue their own projects and bring the sorts of topics to light that the people wish to see highlighted upon the big screen.

Media Baithak serves as a community space for the cultural engagement of media and civil society representatives. It gives a platform to distinguished voices from the fields of journalism, politics, academia and other fields to discuss contemporary issues of the society.

The organization has previously conducted dialogue and performances on the significance of Sufism, poetry, theater and storytelling in preventing and countering extremist elements in society. Media Baithak also focused on the role of freedom of speech and social media when it comes to a cohesive and collective society. 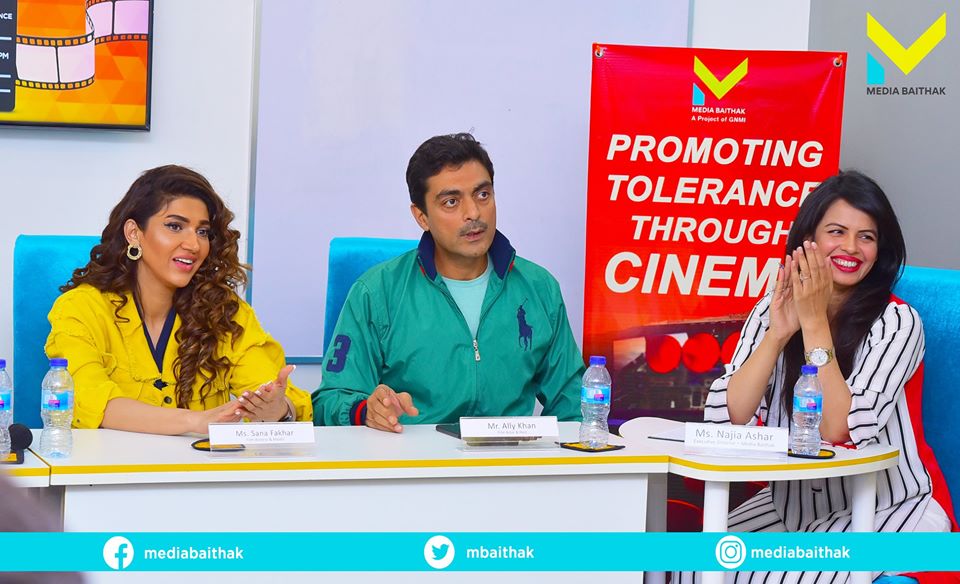 Yasir Akhtar raised his voice against the injustices of the PTV...

“The most special moment in my life was when I became...