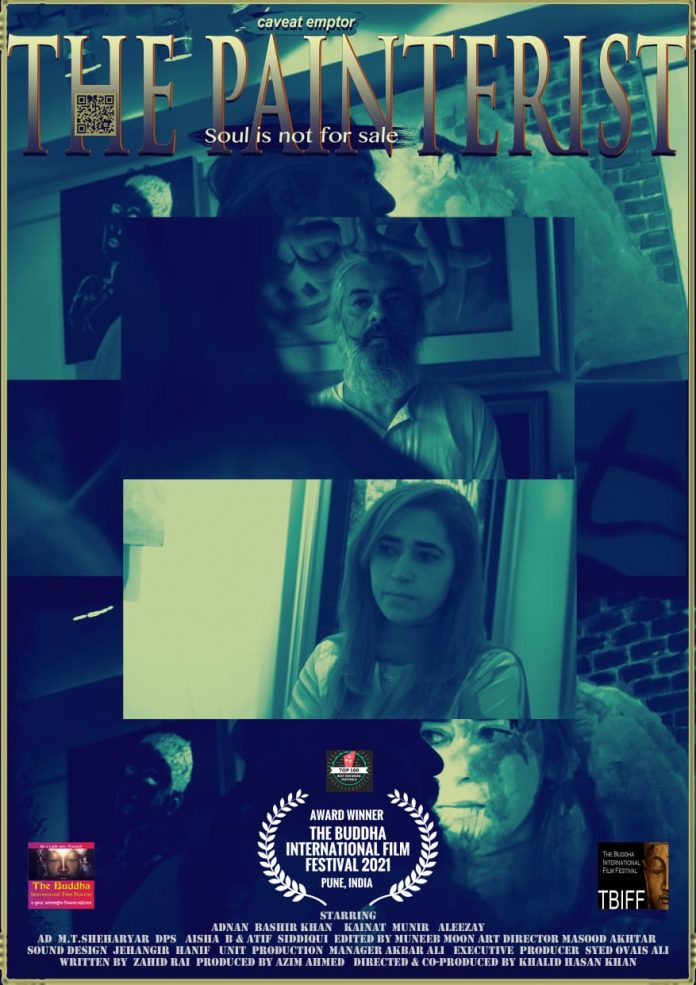 Pakistan’s short film “The Painterist” was awarded “The Best Experimental Short Film” from the fifth annual Buddha International Film Festival, held in Pune, India. The festival commemorates the universal principles of Gautama Buddha, whose humanitarian message is wisdom, kindness, patience, generosity and compassion.
The film stars Adnan Bashir Khan, Kainat Munir and Aliza Javed. The story of The Painterist is about a poor artist whose paintings being sold by the curator of an art gallery, under a different name. This short film deals with reality of credit-stealing from an artist. The Story is written by Zahid Rai. The Painterist has been produced by Azim Ahmed and directed by Khalid Hasan Khan.

The Painterist is a short experimental film dealing with a concept, which is an unfortunate reality in today’s world; of depriving an author, artist or broadly speaking, the creator from his or her credit and compensation or both, by stealing his or her work. This fictional biopic story is about the life of a fine artist, whose name was Shahid. Being an unknown painter, he had been selling his artwork to a dilettante lady, Tanya, for a fistful of money. One day he comes to know, he was selling his soul! Intellectual piracy is motif of this micro-short film. “The Painterist” acknowledges and appreciates the artistic ardor of those creators who have been ripped off by art-stealing pirates, credit-hijackers in this bandit territory, but their passion is unpoachable.

Khalid Hasan Khan, the filmmaker of The Painterist told that “he coined the word “Painterist” by blending painter with artist; an award from the Buddha International Film Festival is an honor for the Pakistani nation. Our country is the cradle of thousands of years old Buddhist art and culture. The ancient icons of the Gandhara civilization in Peshawar, Swat, and Taxila are part of our glorious cultural legacy”.