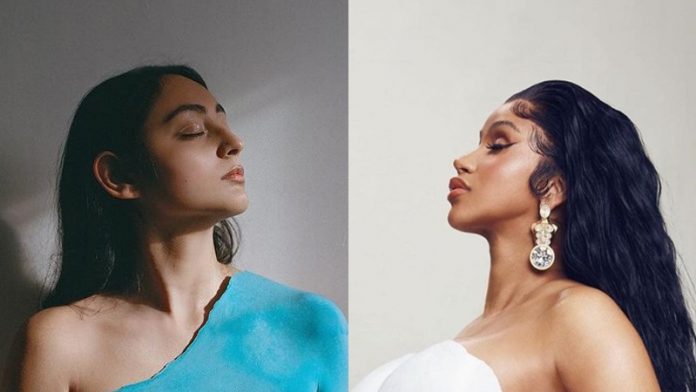 “You thought I was finished?” Misha wrote, sharing a clip from the video. Cardi is wearing a gold breastplate and arm cuff designed by her.

This is the second time the rapper has worn a breastplate by Misha. Cardi first donned Misha’s creation, a white armour-like accessory, in June when she announced her second pregnancy. The photo had gone instantly viral and has since crossed 14 million views on Instagram.

Misha believes her art enables women to appreciate and reclaim their bodies. She said her Pakistani identity is “deeply woven” into everything she creates.

“In South Asia, women’s bodies are seen in a certain cultural context, and it’s difficult for women to have agency over their own bodies,” Misha said in an interview .

“I’ve been trying to establish myself in the art and fashion scene for the last few years, but I think my work was noticed by Colin Carter, Cardi B’s stylist, because of Reva Bhatt, an Indian-American stylist who had assisted him before, and [who] wanted to give more opportunities to South Asian designers like me.”

But not everyone is pleased with or appreciates what has, according to Misha, enabled many women to embrace their bodies. She finds the backlash and hate “overwhelming” sometimes.

“But I’ve realised that getting this kind of reaction only confirms that the work I’m doing and narrative I’m creating is especially important.” It only shows that people are threatened by women taking charge of their bodies, she added.

“I get comments and DMs daily that my work goes ‘against our culture’ or that ‘how dare I create such designs as a Muslim woman’.”

Misha made it to the Forbes ’ 30 under 30 Asia List in April, 2021 and is known for her collaboration on a sculptural mask with model Gigi Hadid for V Magazine.

Cinemas to reopen across Pakistan from Today.