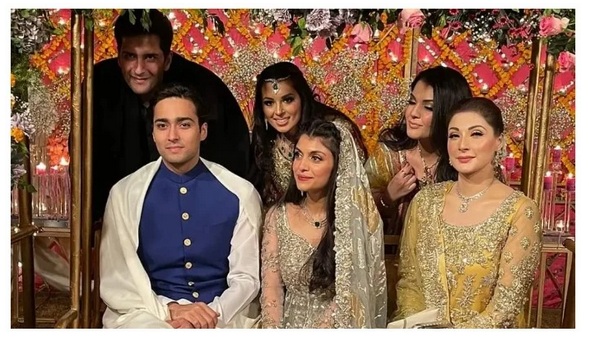 The event kicked off at 5 PM in Mansehra’s Chak Shehzad. During the whole of the ceremony, Captain retired Safdar, Maryam Nawaz and Junaid Safdar were seen humming Mehndi songs while the mother of the groom entered the bride’s house by singing the famous traditional song, “ye pela jora, ye hari hari churiyan”. 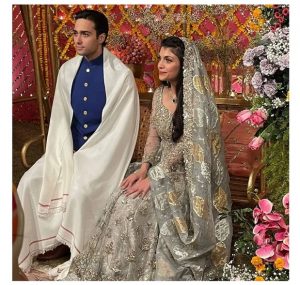 Pictures from one of the ceremonies emerged on social media Sunday in which the couple could be seen dressed to the nines in gorgeous outfits.

Junaid Safdar opted for a crisp white shalwar kameez that he teamed with a royal blue waistcoat embellished with gold buttons and an off-white silk shawl which he draped around his shoulder. He completed his look with a pair of brown monk strap shoes.

On the other hand, his wife, Ayesha Said, looked absolutely gorgeous in a light-grey sharara that boasted gold and silver embroidery and patchwork. She also opted for a silver necklace studded with a black gemstone in the centre.

While the couple looked gorgeous, the groom’s mother, PML-N  Vice President Maryam Nawaz, didn’t fail to impress either. The 48-year-old politician opted for a Tuscan-sun coloured sharara with elaborate gold embroidery. She also opted for a simple, yet elegant choker to finish off her look.

Junaid’s reception, who got married in London in August, is scheduled to take place on December 17 in Lahore.

Farah Talib Aziz Opens Their Flagship Doors with a Bang!