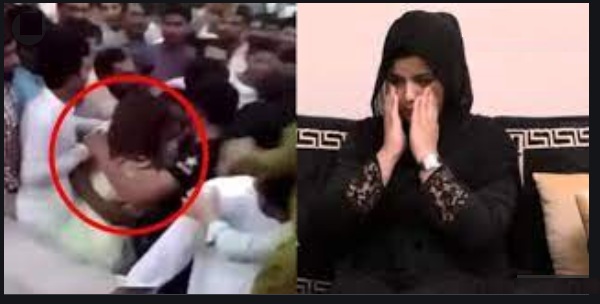 Police have taken into custody more than 15 people in connection with the incident of assault, harassent of a girl at Minar-e-Pakistan.

Capital City Police Officer (CCPO) Ghulam Muhammad Dogar and Commissioner Lahore Captain (retd) Muhammad Usman also  visited the female TikToker who was assaulted and harassed at Minar-e-Pakistan on August 14. The duo met with the victim and her mother at their home and assured them of providing justice in the entire episode. The woman appreciated the Dolphin team who rescued her and said that she got a second life due to them after being rescued from a mob of nearly 400 people.

Police raided Ravi Road, Badami Bagh, Lari Ada, Shafiqabad areas of Lahore searching for suspects in the case. The arrested persons will be matched with those seen in the viral videos of public assault on girl, police said.

The horrific incident took place when countless men harassed and assaulted a helpless female TikToker Ayesha Akram on Independence Day in front of the Minar-e-Pakistan. The incident came to light three days later through social media.

The mob beat the female TikTok star and her companions while the police remained unaware of the incident. The complainant alleged that she, along with six companions, was shooting a video at Minar-e-Pakistan when hundreds of people attacked them.

She also claimed that the people were pushing and pulling her to the extent that they ripped her clothes.

The FIR had been registered under sections 354 A (assault or use of criminal force against woman and stripping her of her clothes), 382 (theft after preparation made for causing death, hurt or restraint in order to commit the theft), 147 (rioting) and 149 (unlawful assembly) of the Pakistan Penal Code.

The complainant said that her companions and she tried hard to escape the mob, but the “crowd was huge and people were scaling the enclosure and coming towards us”.

She also said that some people tried to help her but the crowd was too large and kept tossing her up in the air. The girl said that her ring and earrings were “forcibly taken”, as was the mobile phone of one of her companions, his identity card, and some cash that he had on him.