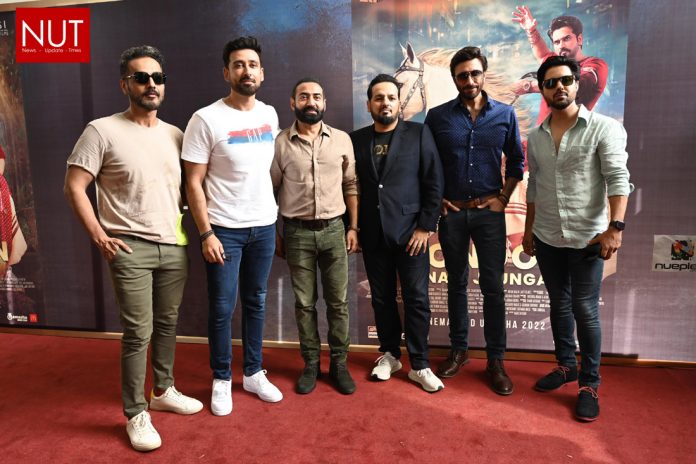 Lahore (Muhammad Yasir) Six Sigma Plus, Salman Iqbal and ARY Films launched the trailer of film, “London Nahi Jaunga”. The trailer premiered at Nueplex Cinemas Karachi on Saturday recently to a full house of press and media, editors, and celebrities from the entertainment fraternity as well as notable directors.

The movie ‘London Nahi Jaunga’ is a romantic comedy with a touch of family drama and, at the same time, lots of passion, intrigue, ambition, and power struggles that encapsulate its journey.

The film stars some of the most powerful names in Pakistani cenima such as Humayun Saeed, Mehwish Hayat, Kubra Khan, Gohar Rasheed, Sohail Ahmed, Vasay Chaudhry, and Saba Hameed. It is produced by Salman Iqbal, Humayun Saeed, Shehzad Nasib and Jerjees Seja. Nadeem Baig is the director of the film. The script is the work of acclaimed writer, Khalil ur Rehman Qamar.

The buzz around the upcoming movie has been electrifying, and it has already garnered a lot of attention with people loving the scale and magnitude that the trailer promises as well as soulful Music to groove to only some of which has been revealed.

Salman Iqbal CEO ARY Group said, “This is the moment that the Pakistani film industry has been waiting for, ever since the pandemic, films in the country have taken a major hit. With the release of London Nahi Jaonga we are seeing a much needed resurgence in the industry”.

“We see the release of London Nahi Jaonga as a milestone in the industry. Major film releases in the country had come to a halt during the last few years, with little to no expression of art and creativity. London Nahi Jaonga with its star studded cast will definitely be a breath of fresh air and open doors newer releases” , stated the CEO of ARY Network Jerjees Seja on the trailer launch event today.

While the much-celebrated Director Nadeem Baig observed, “Film making is a joy that took a back seat due to COVID in the last four years but, now we are back to it again and I couldn’t be happier with the work we have put in London Nahi Jaunga. I hope the audiences feel what we are feeling with it!”.

Humayun Saeed the producer and lead actor of the film remarked

Mehwish Hayat lead actress of the film express her views, “It’s taken 4 tough years to complete this venture and I can’t wait to give my country this eid ul adha gift!”

The film is set to be released on Eid ul Azha.

Theatre Play ‘Heer Ranjha’ to open Curtains for the Cause of...