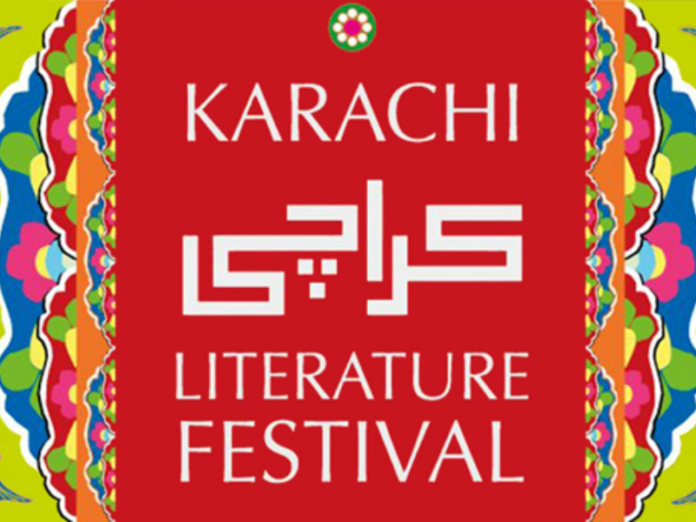 Karachi (Muhammad Yasir) The second day of the 11th Karachi Literature Festival, which is being organized by Oxford University Press (OUP), was again an affair full of invigorating discourses and vibrant performances.

The day started off with an informative workshop held on ‘Media Literacy and Misinformation’ conducted by Sabrina Toppa, an award winning US Journalist based in Pakistan.

The renowned historian William Dalrymple made a presentation on the book Forgotten Masters: Indian Painting for the East India Company that has been edited by him. The journalist George Fulton introduced Dalrymple. Following this session, there was a conversation on ‘Aurton kay Takhleeqi Shaoor say Inkaar Kiyun?’ between Zehra Nigah and Arfa Sayeda Zehra. This was followed by readings from Hijabistan by Sanam Saeed, along with a discussion between Sabyn Javeri, Sanam Saeed, and Saima Saleem. A session which attracted a great deal of interest was ‘The Deepening Crisis of the Middle East’ featuring Ahdaf Soueif, Massimo Ramaioli, Shahid Amin and Zafar Hilaly as panellists.

Ten book launches took place on the second day of KLF including that of The Anarchy: The Relentless Rise of the East India Company by William Dalrymple; On Their Own Terms: Early Twenty First Century Women’s Movements in Pakistan by Fouzia Saeed; Transgressions: Poems Inspired by Faiz Ahmed Faiz by Anjum Altaf; Tooti hui Tanab Udhar by Asghar Nadeem Syed; Subjective Atlas of Pakistan by Taqi Shaheen and Annelys de Vet; Interpretations of Jihad: An Intellectual History by Tariq Rahman; and Zair e Aasman by Shahid Siddiqui.

A discussion on Love, Relationships and Muslim Women’s Writing took place between Claire Chambers, Muneeza Shamsie, David Waterman and Sabyn Javeri, and it was moderated by Ilona Yusuf.

A discussion on the book Prison Interlude: The Last Eyewitness Account of the Rawalpindi Conspiracy Case by Zafarullah Poshni was also held on the second day of KLF. The speakers were Zafar Ullah Poshni, Mazhar Abbas, Kamal Azfar and Wusatullah Khan. The moderator was Owais Tohid.

Kishwar Naheed and Noorul Huda Shah were in conversation on Khawateen ka Mazahimati Adab in later half of the day. Highlighting the water problem in Karachi, ‘Drop by Drop: Karachi’s Water Crisis’ was another important session held with Farrukh Rasheed, Babar Siddiqui, Wusatullah Khan, and Khalid Shaikh as speakers.

A discussion by Sharif Awan and Athar Masood was held on the topic ‘Traditional Music on Modern Media: Is there a Symphony in this Noise?’. In line with the theme of this year’s festival, an enlightening discussion took place titled ‘Shumali aur Lateeni Amreeki Adab Pakistan Mein’. It featured Nasim Syed, Nasir Abbas Nayyar, and Syed Kashif Raza as panellists.

Screening of award-winning films of the 2019 EACPE video competition was presented by Getz Pharma. The film submissions were on the theme ‘Is Pakistan a Brave Nation?’

Screening of the feature film Baaji directed by Saqib Malik attracted a huge number of film lovers. A musical performance by ACMA band, presented by Arts Council of Pakistan, marked the end of the second day of KLF.

Nielsen and IBA CDC launches Nielsen Academy for students at the...