Indus Motor Company Limited (IMC), the makers of Toyota vehicles in Pakistan, has announced that it would invest $100 million in the local production of hybrid electric vehicles. The amount will be invested over the period of three years, said the company in its filing to the Pakistan Stock Exchange (PSX) on Wednesday.

“We are pleased to announce that, based on the incentives provided against certain taxes, duties as announced by the Government of Pakistan through Finance Act 2021, and subsequent Statutory Regulatory Orders (SROs), the company has evaluated and plans to invest an estimated aggregate amount of $100 million, over the next 3 years, for the local production of Hybrid Electric Vehicle (HEV) in Pakistan,” the company wrote in letter to Pakistan Stock Exchange (PSX).

The automotive manufacturing company said that the announced investment shall go towards plant upgradation, extension, localization of parts or components, and production preparation or assembling of HEVs. 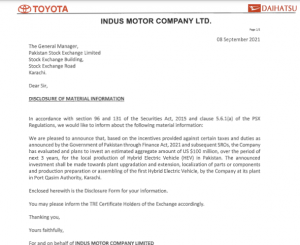 “The production by the company shall be done in Port Qasim Authority, Karachi,” the statement added.

The announcement comes after Toyota Motor Corp, IMC’s parent company, said that it expected to spend more than $13.5 billion by 2030 to develop batteries and its battery supply system as the move to hybrid electric vehicles gathers steam. The federal cabinet on Dec.22 had approved Pakistan’s first Electric Vehicle Policy.

The motorcycles and vehicles would be shifted on electric power, while Electric Vehicle Manufacturing Units would also be established in the country. Under the new EV policy, the Sindh Transport Minister Syed Owais Shah back in March 2021 had launched Pakistan’s first electric bus in Karachi۔