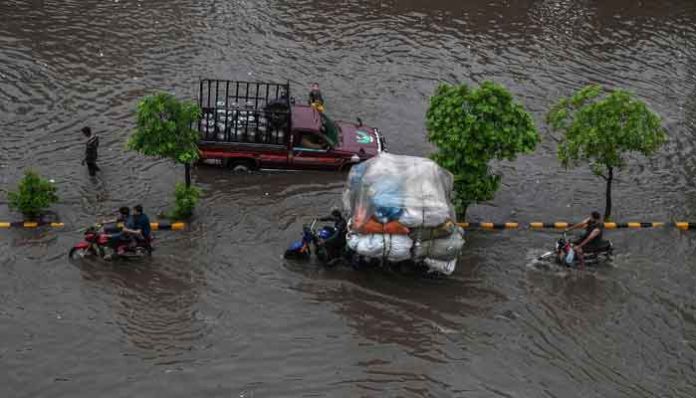 Heavy rains in different cities of Punjab disrupted life on Tuesday, with streets severely inundated and at least two people killed in various rain-related accidents. Low-lying areas in Faisalabad and Mianwali lay flooded, with water flowing into houses. The railway track in Mianwali is feared damaged by the urban flooding.

Heavy rains were also reported in Gujranwala, Jhang and Murree.In Lahore, 99mm of rain made the weather pleasant, however, one person was killed and 10 others were injured when the roofs of their houses collapsed.

Traders in cattle markets were seen struggling trying to protect animals from the rain.The fire station located at the Allama Iqbal International airport also became inundated, along with the runway and the apron. Rescue and emergency vehicles became stuck in deep, muddy waters.

In Raiwind, a 30-year-old man was killed when the roof of his home collapsed due to the rain, while 10 people were injured in similar incidents in the China Scheme and Mohalnawal areas.

Heavy rain has disrupted the Lahore Electric Supply Company’s (LESCO) transmission system in different parts of the Lahore . More than 130 LESCO feeders have tripped due to rain in Lahore on Tuesday. Many areas in the city are facing power outage due to feeders tripping and other technical faults.