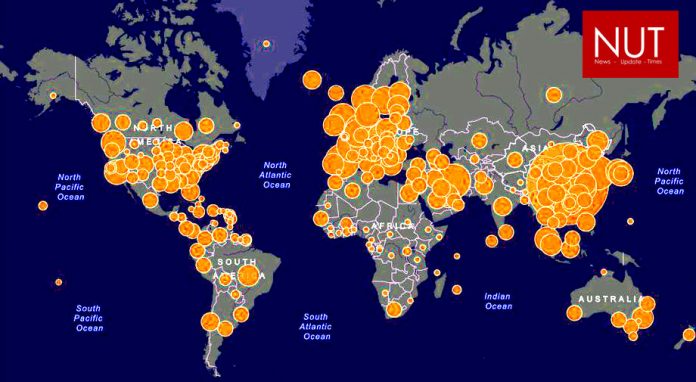 PARIS (NUT DESK) –  The novel coronavirus has killed at least 2,692,313 people since the outbreak emerged in China in December 2019, according to a tally from official sources compiled by media at 1100 GMT on Friday. At least 121,747,630 cases of coronavirus have been registered. The vast majority have recovered, though some have continued to experience symptoms weeks or even months later.  These figures are based on daily tolls provided by health authorities in each country and exclude later re-evaluations by statistical organisations, as has happened in Russia, Spain and Britain. On Thursday, 10,352 new deaths and 542,248 new cases were recorded worldwide. Based on latest reports, the countries with the most new deaths were Brazil with 2,724 new deaths, followed by the United States with 1,376 and Mexico with 698. The United States remains the worst-affected country with 539,699 deaths from 29,667,759 cases. After the US, the hardest-hit countries are Brazil with 287,499 deaths from 11,780,820 cases, Mexico with 196,606 deaths from 2,182,188 cases, India with 159,370 deaths from 11,514,331 cases, and the United Kingdom with 125,926 deaths from 4,280,882 cases. The country with the highest number of deaths compared to its population is Czech Republic with 227 fatalities per 100,000 inhabitants, followed by Belgium with 195, Slovenia 190, Montenegro 188 and the United Kingdom 185. Europe overall has 911,769 deaths from 40,825,963 cases, Latin America and the Caribbean 733,681 deaths from 23,260,255 infections, and the United States and Canada 562,279 deaths from 30,589,363 cases. Asia has reported 265,018 deaths from 16,870,208 cases, the Middle East 109,631 deaths from 6,090,040 cases, Africa 108,967 deaths from 4,077,976 cases, and Oceania 968 deaths from 33,830 cases. Since the start of the pandemic, the number of tests conducted has greatly increased while testing and reporting techniques have improved, leading to a rise in reported cases. However the number of diagnosed cases is only a part of the real total number of infections as a significant number of less serious or asymptomatic cases always remain undetected. As a result of corrections by national authorities or late publication of data, the figures updated over the past 24 hours may not correspond exactly to the previous day´s tallies. India´s wealthiest state Maharashtra and its capital Mumbai have recorded the most daily cases since the pandemic began, stoking a new nationwide wave. Several badly hit states including Maharashtra, Gujarat and Madhya Pradesh have imposed fresh restrictions such as curbs on movement and public gatherings in some cities.