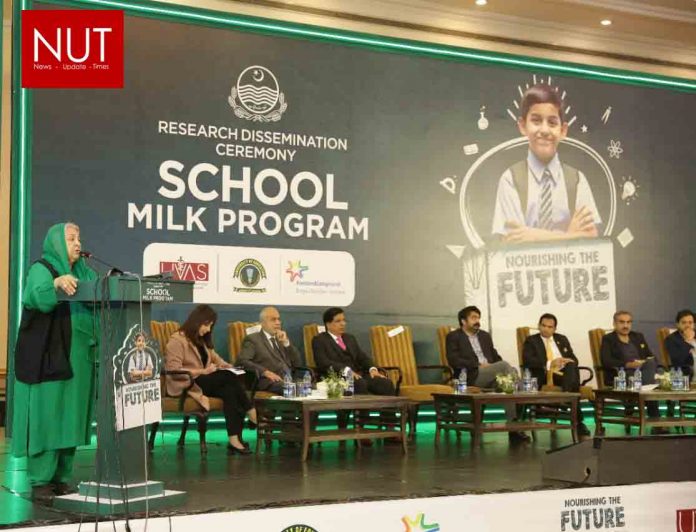 Launched jointly by UoE, UVAS and FCEPL in 2021, SMP aimed to generate research-based evidence on the benefits of daily milk consumption for children and highlight the need to develop a policy for providing milk in schools at a national level.

“The SMP results successfully reflect the importance of inclusivity and sustainability in the nourishment process. The act of providing milk in the daily diets of school going children and how it needs to be expanded to all of Pakistan for a healthy, nourished and well-educated Pakistan. The consumption of packaged, high-quality, safe milk should become part of legislative development through endorsement of the School Milk Program.” Said Sardar Hasnain Bahadur Dreshak, Minister for Food, Government of Punjab. “I appreciate the dedication and commitment of University of Education, UVAS and FrieslandCampina for working cohesively towards making this program a success.”

Dr Yasmin Rashid, Specialised Healthcare Minister said “No policy framework can be effective unless backed by research. Scientific research plays an integral role in establishing and impacting policy development and legislation. 40% of the children in Punjab are malnourished. I am very happy to see that the School Milk Program has been initiated. The results reflect that children’s heights and weights have increased after the Program, and will definitely help in initiating dialogue with the relevant government departments”

With an aim to develop a healthy and well-educated Pakistan, UoE worked with FCEPL to implement SMP in its 89 primary schools in District Attock and Sheikhupura. FrieslandCampina supported the initiative with its technical and operational expertise by developing requisite milk supply chain, resources for research, and communication. Food Science & Human Nutrition Department of UVAS conducted research regarding impact of the SMP on nutritional status of children and school attendance.

Punjab Minister for Higher Education Raja Yasir Humayun Sarfraz stated: “Research is the forte of universities and we should using this as a foundational resource for optimum policy frameworks – so that it stays relevant for the future.”

SMP reiterates that milk as an essential food is integral to a complete and healthy meal. The Program evaluated the status of children in selected schools of Attock and Sheikhupura and the impact that milk provision (full cream milk & flavoured) had on their growth, nutritional deficiencies, and body composition – results of which were announced at the event.

“By providing milk, the health indicators have objectively improved in all children who received it.” Said Prof Dr Nasim Ahmed, Vice Chancellor of the University of Veterinary and Animal Sciences. “It is my recommendation to all stakeholders, especially the Provincial governments, the Federal Governments and even the private sector to adopt such programs; this is an ideal time to upscale such projects of immense importance to our human capital and country itself.”

University of Education, Vice Chancellor, Prof. Dr. Talat Naseer Pasha commended the Govt of Punjab and said “The pilot project was implemented along scientific lines with purely professional methods. Not only the participating children, but their parents were also taken into confidence and made aware of the objectives of the SMP. The results were amazing. The most important issue we face with children in public schools is school attendance. There was significant improvement noted on that aspect as a result of the program, and attendance in participating schools increased upt to 20 percent, the study noted. I highly recommend that this program is upscaled and the learning/findings from this project warrant the same”

The SMP also addressed issues of rampant truancy and lack of children’s education in the country. Currently, Pakistan has the world’s second-highest number of out-of-school children with an estimated 22.8 million (44%) children aged between 5-16 not attending school at all. In the 5-9 age group, 5 million children are not enrolled in schools and after primary-school age, the number doubles. 11.4 million adolescents between the ages of 10-14 are not receiving formal education. Nearly 10.7 million boys and 8.6 million girls are enrolled at the primary level and their numbers drop significantly (to 3.6 million boys and 2.8 million girls) by the time they reach the lower secondary level.

Ali Ahmed Khan, Managing Director, FrieslandCampina Engro Pakistan Ltd said “At FrieslandCampina, our vision is Nourishing by Nature, now and for generations to come. The School Milk Program is an extension of that. With these learnings, we will further partner with the Government and Development agencies to expand this program throughout Pakistan and provide lasting nutrition to our children. Doing so will ensure better attendance in schools as well.”

The successful completion and results of the School Milk Program are reflective of high impact, collaborative partnerships between the private and public sector in pursuit of the health and well-being of the nation.