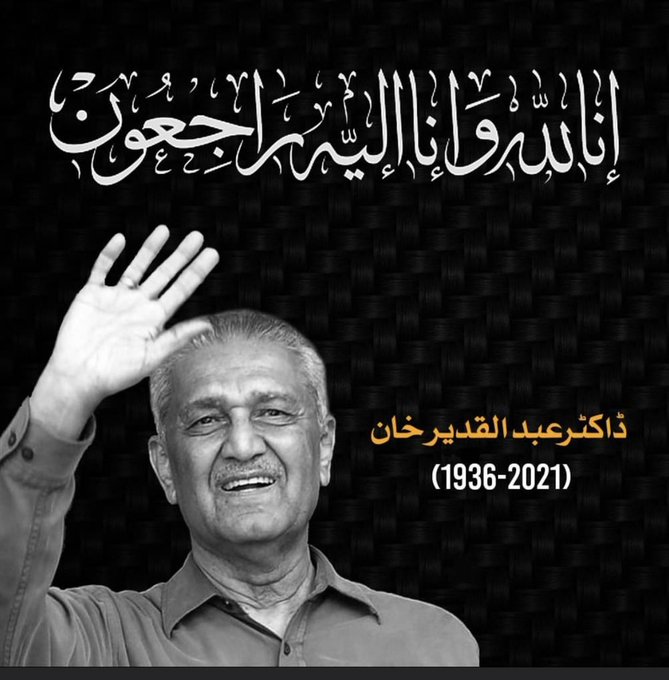 Nuclear scientist Dr Abdul Qadeer Khan breathed his last in Islamabad Sunday morning at the age of 85. He was given a state funeral at Faisal Mosque and later buried at the capital’s Sector H-8 graveyard.

“In pursuance of announcement by Prime Minister of Pakistan, State Funeral shall be accorded to Dr. Abdul Qadeer Khan. The national flag of Pakistan shall fly at half-mast on Sunday, 10th October, 2021”, read a notification issued by the Ministry of Interior.

Taking to Twitter, PM Khan said, “Deeply saddened by the passing of Dr A Q Khan. He was loved by our nation bec of his critical contribution in making us a nuclear weapon state. This has provided us security against an aggressive much larger nuclear neighbour. For the people of Pakistan he was a national icon.”

Shortly after the news of the nuclear scientist’s death broke, celebrities through their social media accounts expressed sadness and grief over the passing of “father of Pakistan’s nuclear programme”.

“Saddened to hear about the loss of Dr #AbdulQadeerKhan. He was a patriot and the nation will always be indebted to him for his services to our country,” tweeted renowned actor and singer Ali Zafar. 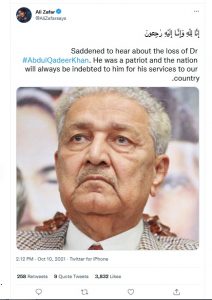 Actor Imran Abbas said, “The father of Pakistan’s nuclear programme Sir Abdul Qadeer Khan is no more. Inna Lillahe wa Inna Elehe Rajeoon. Standing ovation to our hero for giving us strength and power with the grace of Almighty and his endless contributions.” 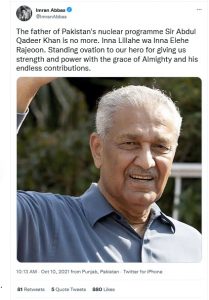 Actor Adnan Siddiqui in a condolence message posted on his Twitter handle said: “We are a nuke-power today only because of AQ Khan. Forever indebted. Khuda Hafiz, Mohsin-e-Pakistan. May Allah grant you higher place in Jannah tul Firdous. Aameen.” 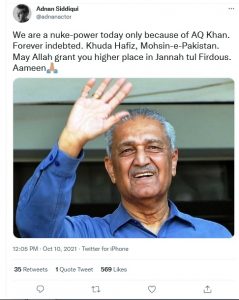 “His contributions made us stand proud and strong. We are forever indebted to you #DrAbdulQadeerKhan,” wrote actor Ahsan Khan. 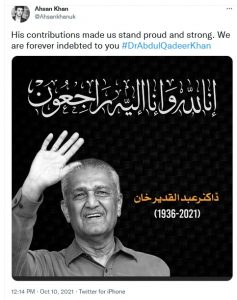 Actress Saba Qamar tweeted: “Sorry to hear about the passing of #DrAbdulQadeerKhan. Thank you for your services Sir! My thoughts and prayers are with his loved ones.”