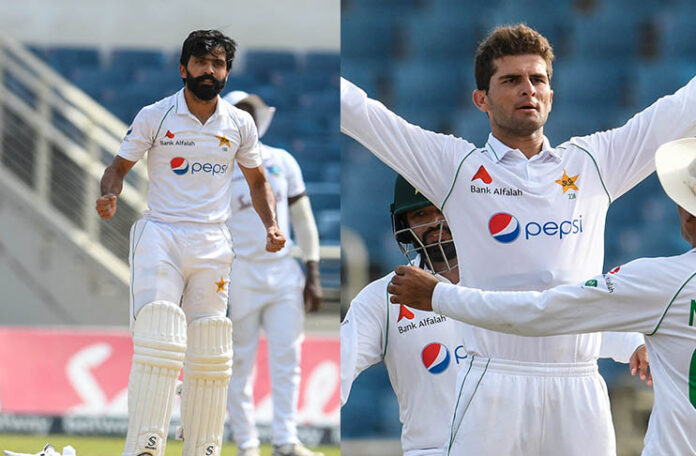 Fawad Alam registered his fifth century while Shaheen Shah bagged early scalps to put Pakistan on top at stumps on day three of the rain-affected second Test of the two-match series against the West Indies on Sunday.

The hosts were teetering at 39/3 after Pakistan declared their first innings on 302 for nine with Fawad staying unbeaten on 124.

The 35-year-old Fawad returned to the crease to complete his fifth Test century, becoming the quickest Asian to score the aforementioned centuries. He reached to landmark in just 22 innings, breaking India’s Cheteshwar Pujara (24 innings) record.

When play did begin before lunch with Pakistan at 212 for four, only eight balls were bowled before the action was again halted as Jason Holder, who was operating from that troublesome southern end, and other West Indies bowlers highlighted their continuing concerns about the soft conditions underfoot.

When play finally commenced in the heat of the afternoon, Pakistan’s overnight pair of Mohammad Rizwan and Faheem Ashraf struggled to get going and the arrival of Jayden Seales and the second new ball started a clatter of wickets.

Fawad remained not out on 124 off 213 balls while skipper Babar Azam was the other notable run-getter, scoring 75 on Day one. Roach and Seales took three wickets each for hosts while Holder bagged two. Pakistan were provided early breakthroughs by spearhead Shaheen as he removed openers Kieran Powell and skipper Kraigg Brathwaite for just nine.

Powell (5) was trapped in front while Brathwaite (4) received a peach of a delivery, resulting in stumps flying behind. Close to the stumps, Faheem clean bowled Rostan Chase (10). Nkrumah Bonner (18*) and night watchman Alzari Jospeh (0) batted till the stumps with West Indies trailing by 263 runs.

ARY and PTV scoops rights of ICC for Pakistan

‘My running days are over’: Shoaib Akhtar going for total knee...