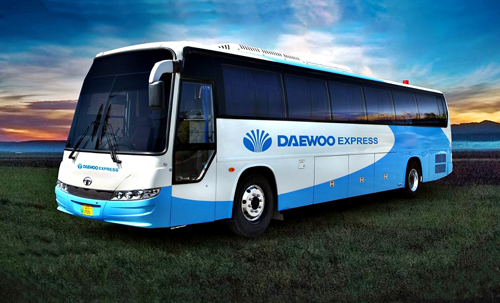 Lahore – Pakistan’s largest transport company, Daewoo Pakistan Express, started its new state-of-the-art bus terminal at Thokkar Niaz Baig, Lahore on Friday, March 31, 2017. In this regard, a formal inaugural ceremony was held at the new bus terminal, which was attended by Malik Muhammad Rafique Rajwana, Governor Punjab as a chief guest. The governor cut the ribbon for the first bus departure from the terminal.  Addressing the gathering on the occasion, he said that over the years, Daewoo had revolutionised the transport infrastructure and logistics by setting new standards and re-defining the concept of bus travel and cargo movement in the country. He further said that Daewoo had become a household name in Pakistan and was an integral part of the lives of millions of people who travel inter-city frequently or take the urban transport buses in Lahore and Multan.  Also speaking on the occasion, Daewoo Group President in Pakistan Faisal Siddiqui said that Daewoo’s commitment to invest further and expand business in Pakistan was best reflected in this most modern terminal complex which is capable of handling much increased passenger-count and bus arrival/departures.

President Daewoo Express Chang In Park said that the new terminal marked the beginning of a new era for Daewoo Express, “And we are very confident that shifting of the terminal will be mutually beneficial to the public, the government and also Daewoo.