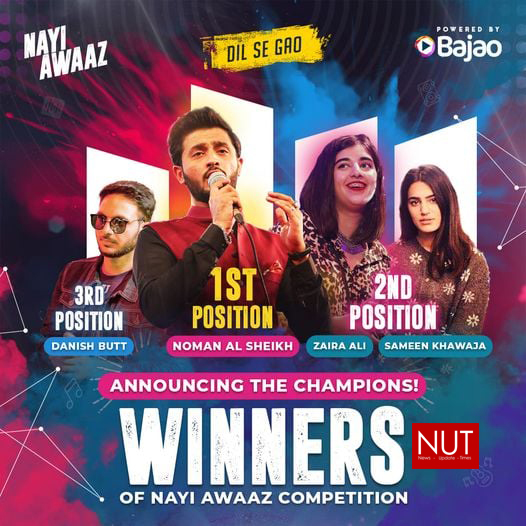 After months of anticipation and amazing musical talents pouring in from all over Pakistan, three music geniuses have won the hearts of Pakistan to become the winners of Bajao Pakistan’s online music competition, Nayi Awaaz.

The moment that everyone has been waiting for! The three winners who have made it to the top of Nayi Awaaz:  3rd Position goes to Danish Butt (winning a cash prize of 2 lakhs) ,  2nd position is a tie between Sameen Khawaja and Zaira Ali (winning a cash prize of 4 lakhs each), and the winner of the competition is *drumroll* Noman Al Sheikh (winner a grand cash prize of 5 lakhs and a song produced by a leading music producer).

Congratulations to all the winners and we wish them the very best of luck for the future!

The team behind Bajao.pk, one of Pakistan’s leading music streaming platforms, devised an ingenious plan to promote and bring forward the hidden talent of Pakistan. Nayi Awaaz, the biggest and one of its kind online singing competition was launched with full hype and vigor on January 26th through Bajao Music’s social media handles including Facebook, Instagram and the Bajao Music App.  The celebrities onboarded included the most popular names from the music industry: Yashal Shahid, Abdullah Qureshi, Umair Jaswal and Bilal Khan.

Not only was the scale of the competition huge, but also the prizes that were announced for the top 3 positions were amazing. Major cash prizes for top 3 as well as the chance to work with one of the leading music producer (for 1st position) gave the contestants something to look forward and added to their incentive to come out as the best of the best in Pakistan!

After the competition was declared open, Bajao Music received an overwhelming response with 1000+ entries from aspiring singers from all over Pakistan. With so much talent and such strong vocals, the judges had a tough time shortlisting winners for the next round. Public voting was also given heavy weightage in the assessment process.

Nayi Awaaz received a lot of love from the people of Pakistan and massive attention from media.

Nayi Awaaz was based on 3 rounds, providing exemplary opportunities to underground singers to showcase their talent and become the next voice of Pakistan. From the 1000+ entries, 125 contestants were shortlisted and entered the 1st Round; 25 winners of this round qualified for 2nd round; and then 10 lucky winners made it through the 2nd round. After this, the 3rd and final round took place and 3 winners were selected. While the 1st round was based on cover songs and could only be judged on voice quality and performance, Round 2 and 3 had a twist! The finalists for these rounds were given three interesting hashtags to choose from and then this hashtag had to be included in their original songs.

Nayi Awaaz was not just another competition. It was a designed to be a musical journey for the singers, from developing voice quality to using their creative juices to produce music that brings out their personalities.

We look forward to many more musical events from Bajao Music. If you haven’t already, do download the Bajao Music App, and listen to the music that has won the hearts in this Nayii Awaaz competition!!!