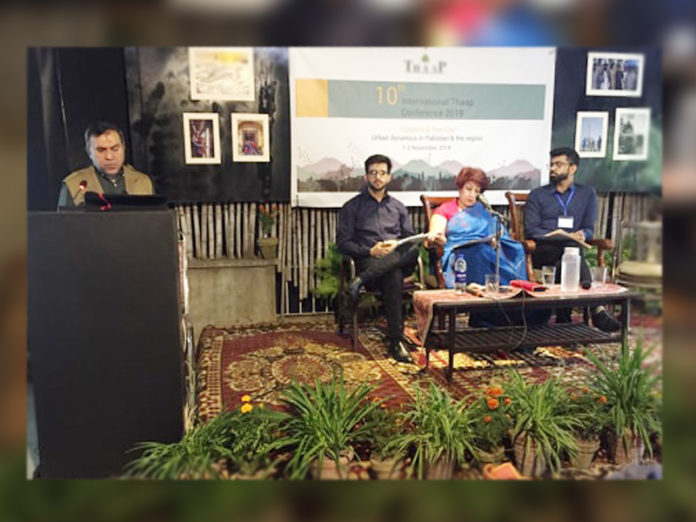 Lahore (Muhammad Yasir) The paper reading sessions continued on the 2nd November at 43-G, Gulberg-III, Lahore and will continue till the 3rd of November at the same venue. THAAP provided a formal platform where papers were discussed on the theme of “Citizen and the City” and an in-depth dialogue took place. 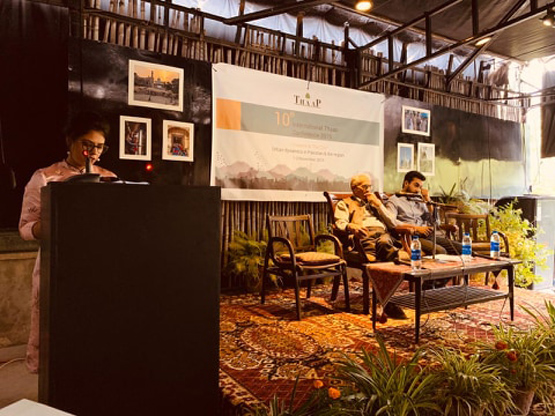 The conference was well attended by professionals of varying fields and delegates from Australia, China, Germany, Switzerland, India and Pakistan took part in the conference which further enriched the discussion. The third session of the conference was chaired by Prof. Pervaiz Vandal, Pro-Vice Chancellor Institute for Art and Culture, Lahore. Papers were presented by Salman Basharat titled as “Regeneration of Old Buildings through Narrative and its Impact on Urban Wireframe – A Journey towards Futuristic Past”. The research aims to initiate an intensive commitment with temporary, sensorial and social qualities of space and a young engagement of architecture in an urban setting. Moreover, understanding the urban ecosystem as an architect is what explains the fundamental connections amongst the existing buildings. It exposes the stitches through which our perception towards architecture and its existence is connected and how it makes a remarkable impact on the surroundings. Dr. Anwar Shaheen’s research paper titled “Evicted to the Margins: Resettlement and Sufferings of Families Displaced by Lyari Expressway in Karachi” was presented by Ar. Noor Ul Huda. Her paper threw light on drastic repercussions of mass-displacement that was done in order to propagate large-scale projects like Lyari Expressway. The paper highlighted social and psychological and ecological impact on the community and area of Lyari; and their longstanding struggle for their social, civic and community rights. The fourth session was chaired by Ar. Waqar Aziz, Head of Department, Architecture and Design, Comsats University, Lahore. Papers were presented by Dr. Abdul Haseeb Mir titled “Religion, Radicalism and the Regional Dispute: Understanding Political Discourses Set by the Piety and Politics at Hazratbal Shrine in the Kashmir Conflict”. He talked about the ideological and cultural history that has been distorted and has been substantially radicalized under the recent amendments under Modi regime. Going through a historical timeline of pre and post partition, Dr. Haseeb Mir provided an insight into religious and political services of Harzatbal shrine. He stressed about how regional conflict of Kashmir and stripping of religious rights from people of Kashmir has led to the development of a global ideology of Islamic radicalization as an act of resistance against the recent Hindu occupation. 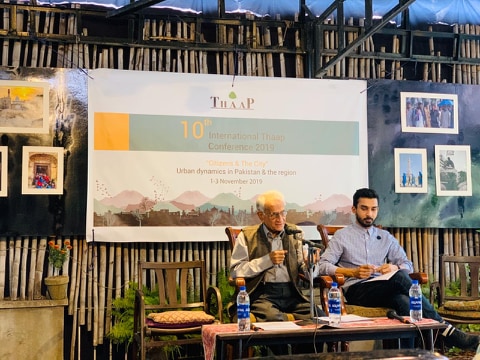 Dr. Ali Mohsin’s paper titled “Cash Transfers and the Politics of Distribution: Ambiguous Terrains of Social Protection and Citizenship in Pakistan” stressed on sensitive aspects of socio-political and economic issues. Highlighting the social-cultural disconnect of post-colonial societies, he tried to redefine citizenship as to what it does for people rather than what it actually is, that which should be analyzed with respect to aspirations and rights of the people. The fifth session was chaired by Dr. Kanwal Khalid, Associate Professor, Institute for Art and Culture. Papers were presented by Prof. Dr. Noman Ahmed titled “Exploring Urban Dynamics in Architectural Education: Comprehensive Environmental Design Studio (CED) in Two Architecture Schools in Karachi” which has been recognized as a useful educational tool that connects academia with participants in shaping the environment. It enhances observational, participatory and analytical abilities in students and will open up avenues for young architects beyond conventional practice. Soban Khan’s paper titled “The Right to the City(zen) Investigating the Urban Dynamics in Pakistan and the Rights of Citizens” talks about the Pakistani urban population’s struggle to get the basic amenities such as affordable housing, a well-structured transportation infrastructure and better healthcare facilities to live a balanced life. He recommended enhancing the overall infrastructure and the correlation of the infrastructure with the urban fabric. Muhammad Abdullah’s paper titled “Death of the Pedestrians – Signal Free Corridors”, focused on Lahore among other metro cities of Pakistan facing many traffic jams at signals and based on such conditions, the projects of Signal Free Corridors were planned and executed but have failed to facilitate the pedestrians. Hence, the city is becoming more automobile focused as the numbers of vehicles are increasing rapidly. The sixth session was chaired by Prof. Dr. Neelam Naz, Chairperson, Department of Architecture, University of Engineering and Technology, Lahore. Papers were presented by Prof. Dr. Tariq Rehman titled “Language and the City”. 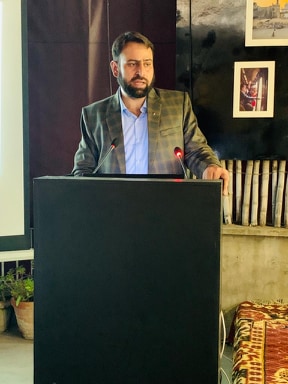