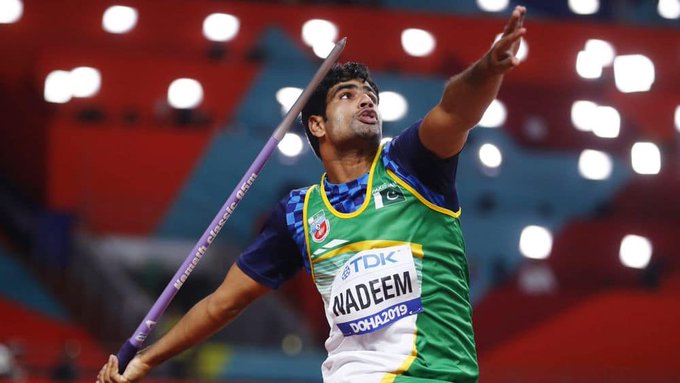 Pakistani athlete Arshad Nadeem has impressed fans at home and abroad after qualifying for the Tokyo Olympics 2020 Men’s javelin throw final. In his first attempt, the 24 years old Pakistani athlete could reach the 78.5m mark but in the second attempt, Arshad created history with a throw of 85.16m that also placed him on top of group B.

This was overall the third-best throw in the contest after India’s Neeraj Chopra (86.65m) and Germany’s Johannes Vetter (85.64m).

Arshad Nadeem is the first-ever Pakistani athlete to qualify for the final of any track and field event in the Olympics.

Pakistanis on social media are looking towards Nadeem to make the nation proud by ending its Olympic drought and bagging the first medal of the Tokyo Olympics 2020 when he performs in the final round on August 7.

This is also Arshad’s third-best throw in a competition. Earlier this year, Arshad threw the javelin to a distance of 86.39m for his personal best and a national record during the Imam Reza championship in Iran. Earlier in 2019, he threw 86.29m at South Asian Games in Nepal.

So, one can safely say that Arshad’s best is yet to come and hope that the best comes at the final on 7th August, which is scheduled to commence at 4:00pm Pakistan time.